A sister
Reg Cox was a minor character in EastEnders, who appeared in the first episode. He was found almost dead in his dingy flat by Den Watts, Arthur Fowler and Ali Osman. He died in hospital shortly afterwards.

Reg was only a minor character who never spoke but due to his death opening up the serial, he is one of the show's most memorable characters.

Reg was later played by Marc Tufano in the spin-off CivvyStreet. The character has also appeared in two books "Home Fires Burning" and "Swings and Roundabouts".

Reg Cox was born in 1926 in Walford. He had an older sister. Reg grew up in Albert Square, Walford. Aged 16 in 1942, Reg joined the army. After the war, Reg returned to Albert Square. As an adult he had a flat at No 23 Albert Square. As he got older he became more grumpy and turned into a cantankerous old man. In February 1985, local villain Nick Cotton wanted his war medals so beat him up in his flat, and left him almost dead, and it was a couple of days before Reg was discovered.

On the 19th February 1985, one sunny afternoon, 3 of Reg's neighbours, Den Watts, Ali Osman and Arthur Fowler broke into Reg's flat concerned for him. They saw him lying almost dead in his chair. Den ran across the Square to Dr Legg's surgery, sent the doctor over and phoned for an ambulance. Reg was taken to hospital but later died. He was 58 years of age.

Dr Legg was phoned and was told the news that Reg's death is now a murder inquiry.

Police suspected Mark Fowler but he had an alibi. Within a few weeks they were certain that Nick Cotton was responsible. The DI reported to Dr Legg that stolen property, including the medals taken from Reg, had been found in Nick's flat. In the same episode, Nick attacked Ethel and confirmed he had attacked Reg.

In 1988 Nick confessed to Den Watts in prison that he was responsible for murdering Reg. In February 2000, Dot Cotton mentioned it was 15 years since Reg died. In November 2014, Reg's killer Nick Cotton had been using Reg's name as an alias, over 29 years after Reg had died.

Almost 30 years later, just days short of the 30th anniversary of his death, in February 2015, Nick, who had taken a heroin overdose, was being comforted by his mum Dot. Nick told her he had killed Reg, and then Nick himself passed away. Nick died in almost the same spot that Reg died at as he was in hiding at Number 23 (Reg's flat had been upstairs and Nick died in a room downstairs). 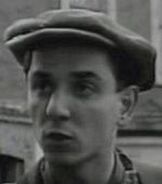