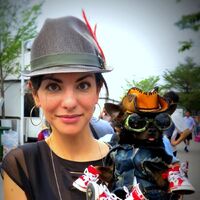 Rebecca Michael is an ex-actress and Head of Marketing and Communication Products for Google who appeared as Janine Butcher in EastEnders from 1989 to 1993.

Aside from EastEnders, Rebecca only has one other credited television appearance under her wing, and that was in Love and Death on Long Island as the character Abigail in 1997, four years after her East End departure.

Since leaving her alternate days, Rebecca has pursued on a successful career in marketing and has landed herself an impressive job for Google. She has been so successful in what she is currently doing that even the press seemed to notice who she was and leaked her current projects in the press.

Retrieved from "https://eastenders.fandom.com/wiki/Rebecca_Michael?oldid=149683"
Community content is available under CC-BY-SA unless otherwise noted.