Ronnie Mitchell
Roxy Mitchell
Danielle Jones
James Branning
Matthew Mitchell-Cotton
Amy Mitchell
Billy Mitchell
Janet Mitchell
William Mitchell
Madge Mitchell
Jamie Mitchell
Lola Pearce
Aunt Sal
Lexi Pearce
Raymond Dawkins (also Mitchell and Fox) is the son of Phil Mitchell and Denise Fox. He was adopted by Jonah and Lydia Dawkins off-screen as Denise is unable to care for him but they died in a car crash and is now being brought up by his biological mother, Denise.

Denise Fox gives birth to her and Phil Mitchell's son, due to a one night stand, and she puts him up for adoption and doctors calling him 'baby Mitchell' after Phil visits him quite a few times. Social worker Trish Barnes visits Phil and Denise a few weeks later, to inform them how her son is doing with his foster family and that he's been named Raymond after Ray Charles, the American singer, songwriter and musician as his foster parents are big fans of him. Denise later reads a letter from his adoptive parents informing her that Raymond is living a happy life with them. Months later, Denise gets confirmation that the adoption has been finalised. Denise gives Phil the letter about Raymond's progress. When Phil gets an offer for some land he owns, he tells Sharon that he would like to provide for Raymond. In July, Phil's eldest son, Ben Mitchell, is angry when he finds out about Raymond.

In September 2020, Raymond returned to the series following the death of his adoptive parents and sister in a car accident. Denise visits Raymond in hospital and meets Raymond's adoptive grandmother, Ellie Nixon for the first time. Denise eventually gets custody of Raymond. 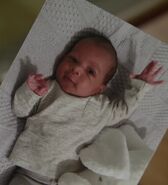 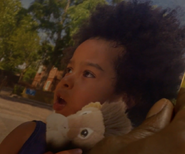