Abi Branning
Lorraine “Rainie” Highway (née Cross; previously Branning) is the daughter of William and Cora Cross and sister of Tanya and Ava.

Rainie lived on the Ainsworth council estate with her mother Cora, sister Tanya and her father. In her teenage years, her father was diagnosed with cancer and Tanya had helped him die, unknown to Cora and Tanya until years later.

Rainie first appears at her sister, Tanya’s house, claiming that she is no longer using drugs but Tanya catches her attempting to inject heroin and gives her a choice to take the £500 and never to see Tanya or her children again, or stay the night and get help with her problems. Rainie leaves with the money without Tanya's knowledge. Ignoring Tanya's ultimatum, Rainie returns to Walford in January 2008. Tanya is in an emotional state, having recently split from her husband, Max Branning, following his affair with his daughter-in-law, Stacey. Repentant, Rainie tells Tanya that she has stopped using drugs and has kicked her habit; she pledges to stay in Walford to support her sister through her break-up, proving that she has changed. She gives Tanya back the £500 that she stole from her and tries to build her relationship with Tanya. Tanya temporarily lets Rainie stay, but she tests positive for Marijuana. After an argument, Rainie leaves Walford. It is later revealed by Max to Tanya in October 2008 that Rainie is living and working as a barmaid in Nottingham.

Rainie returns to Walford in 2010 and tells Max she is clean and sober, and asks Max for Tanya's phone number. Tanya's daughter, Abi, wants Rainie to stay and Max agrees. She steals money out of Max's sister, Carol‘s purse, which she uses to buy crack cocaine. Max catches her with the drugs and throws her out. She starts looking for her drugs where a drunken Phil Mitchell approaches, finds Rainie's crack cocaine and is tempted to try some after she says it helps her block out her memories. Phil and Rainie get high at Phil's home. Rainie goes to get more drugs when Phil steals money from The Queen Victoria public house, but is mugged by a drug dealer. Phil's girlfriend Shirley Carter offers to help him get clean but throws Rainie out of the house, calling her pathetic.

In 2011, Rainie returns to Tanya's house as their mother, Cora, is visiting. Rainie says she is now completely clean and is staying with Cora because her counsellor wants her to reconnect with her family. When Tanya and Greg Jessop go on their honeymoon, Rainie looks after their house and meets Phil at R&R. They talk about their past but he tells her that he does not want to associate with her and leaves. She and Jack Branning then get drunk together and later go to his flat and have sex. Jack rejects Rainie the following morning. Tanya and Greg return and see how much trouble Rainie has caused. She also causes trouble with Shirley so Tanya asks her to leave but Rainie persuades Tanya to let her stay, much to Greg's disappointment. Rainie visits Jack's wife Ronnie to find the knickers she supposedly left behind and taunts Ronnie, asking her to tell Jack to phone her, leading to her being kicked out again. She joins a support group to help her stay off drugs and alcohol which Phil also attends. Rainie struggles and calls her drug dealer but Phil catches Rainie with drugs and takes them from her, destroying them. She gets drunk and goes to Tanya's salon, where Tanya takes her home. Greg throws her out after Tanya lies that Rainie tried to stab her. A few days later, Phil finds Rainie in the pub and Shirley catches them talking and wrongly assumes they are romantically involved but finds out that Phil has been sponsoring Rainie. Shirley almost gives Rainie a job in the café but changes her mind.

Rainie leaves Walford again but insists on her return that she is still not taking drugs. However, she faces several temptations by people offering her drugs, eventually buying some from Ryan Malloy. When Phil finds out, he asks Ryan to not sell to Rainie again. Dot Branning takes pity on Rainie and helps her to clean herself up, telling her about drug addict Donna Ludlow and giving her a Bible, which makes Rainie decide to change as she finds religion. Rainie apologises to Tanya for being rude to her earlier in the week, and Tanya agrees to let her stay with her and Greg. Rainie and Cora confide in one another when Rainie says Tanya treats her like a child. When it is revealed that Tanya had an affair with Max, Rainie nearly turns to drink, but stops herself. She gets a job at the R&R club, unaware that she only got it because her boss, Janine Butcher wanted to irritate Phil. The next week, Phil demands Janine sack Rainie and she agrees but Rainie later applies for a job as an office worker with Janine's new property management business but Janine makes her a cleaner. When Phil is sent photos relating to an incident from his past, Rainie stops him turning to drink. Phil tells her about the incident and they start to kiss, but are interrupted by Pat Evans. Rainie mentions the photos to Shirley, making Shirley think Rainie is sending them so she threatens Rainie, telling her to stop.

Rainie later discovers that Tanya has cervical cancer. Max returns with his older brother, Derek, and Derek recognises Rainie from Max and Tanya's wedding and is attracted to her, later mentioning that they had sex. Rainie demands to know why Tanya stopped her treatment and she explains that it did not work for their father and admits she helped him die, shattering Rainie and Cora. Though Tanya and Cora reconcile, Rainie is still angry, telling Tanya she hopes the cancer kills her. She sleeps rough, but then meets Derek and starts a sexual relationship him. When Rainie asks Tanya to apologise over their father but she refuses, as she does not regret it. Cora backs Tanya up and tells Rainie she is ashamed to be her mother so Rainie decides to leave for Tanya's sake, though she apologises for her comments. She breaks up with Derek and leaves.

In October 2012, Tanya and Max decide to remarry. Tanya wants Rainie to attend the wedding but doesn't know where she is and asks Cora to track her down. With help from Jack, Cora manages to get in touch with Rainie and arranges to meet her at a pub, but upon arriving, Rainie has sent her sponsor Olivia, to the pub with a letter. Olivia explains that Rainie has been sober for 41 days and has a boyfriend. Rainie is pleased to have been invited to the wedding but declines to attend, stating that Cora is the reason for her alcohol and drug addictions, requesting that she will leave her alone from now on.

For several weeks, following the death of his daughter Lucy, Ian receives texts and calls from "R", all of which he ignores. After texting her to leave him alone, "R" comes to Walford and is revealed to be Rainie. She blackmails Ian, threatening to tell his fiancée Denise Fox and son Peter Beale that he was seeing her as a prostitute on Good Friday, the night of Lucy's death. When Patrick Trueman sees Rainie, she reveals what Ian has done, but he is unable to tell Denise when he suffers a stroke. Ian meets Rainie to tell her that he will not pay her anymore, but Mick Carter catches Ian and pulls up behind him. Ian drives away so Rainie approaches Mick, thinking he is a customer. He rejects her but the police arrest him for soliciting a prostitute. To protect Ian, Mick pleads guilty. Rainie and Cora meet at the court, as Cora has come to support Linda Carter. Cora confronts Rainie, and realises that she is the prostitute involved, and sees how low she has fallen and gives her money to fund her addiction so she can stop her prostitution. Ian tells Phil what has happened, so Phil pays Rainie, telling her to stop blackmailing Ian. Phil finds a flat for Rainie in Walford but she is thrown out by her landlord because of her prostitution. Phil takes Rainie to Cora to deal with her, so Cora lets Rainie live with her. Rainie tries to blackmail Mick into giving her more money but he insults and humiliates her. She then tells Denise about her night with Ian. Cora promises to help her get clean, but when she goes out, she returns to find Rainie gone and that she has stolen all her money. A flashback later reveals what happened between Rainie and Ian on the day Lucy died.

Rainie returns to Walford in January 2018, visiting her niece Abi, whose life support is to be turned off. Rainie brings a diamond healer as a gift to Abi. The family are devastated when Abi's life support is switched off and she dies. When Max returns to Walford following a break away after Abi's funeral, he marries Rainie and later introduces her as his wife to the residents. Rainie, who claims to now believe in God, stays with Max in his newly acquired car lot and he promises to get them a home and when they visit Abi's daughter, Abi Branning, Max vows that they will get custody of her. Rainie and Max meet with Abi's social worker and use Jack's house to convince him they are suitable to raise Abi and after the meeting, Rainie and Max row about Rainie potentially ruining Max's plan to raise Abi. When Cora offers Rainie the chance to leave Max, relocate to Exeter, run a tearoom and be part of Abi's upbringing with her and Tanya, Rainie takes a cheque from Cora for £50,000, but contacts social worker Calvin and Jamahl visits in Calvin's place. He is not expecting Cora to be there and Cora says Rainie is leaving Max to help her raise Abi, to which Jamahl says the courts still have to decide, however, Rainie says she will not leave Max and they reveal Cora's bribe. Despite initially only having married Max as a business arrangement, Rainie begins to develop genuine feelings for him and is devastated when he nonchalantly reveals he believes Rainie will find somewhere else to live after the custody case. She is also upset when Max signs up for a dating service for one-night stands. Rainie suggests that they have one night of casual sex together, claiming that they are professionals and only need to do it once. Max is almost convinced but Rainie is thrown off course when a woman using the dating service texts Max. Rainie continues to fight her feelings for Max and becomes furious when Max does not show it back. She attempts to leave but Max stops her and begs her to stay. After an emotional talk with Jack, they sleep together again. They agree that it is nothing more than a one-off, but Rainie feels guilty and decides to leave Walford. Max manages to catch her at the station and persuades her to stay. Unknown to Rainie and Jack, his daughter Amy has videoed them kissing. 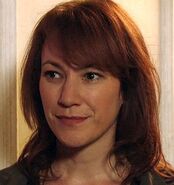 The storyline in which viewers saw Phil and Rainie on a drug binge prompted over 200 complaints. 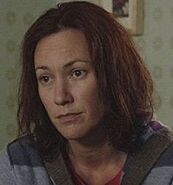 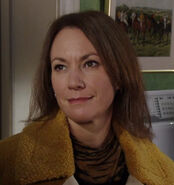 Rainie Cross Tattoo
(13 December 2019)
Add a photo to this gallery
Retrieved from "https://eastenders.fandom.com/wiki/Rainie_Highway?oldid=210714"
Community content is available under CC-BY-SA unless otherwise noted.