Radio Times was the only radio and television listings magazine in the UK until 1955 when the magazine TV Times was published to coincide with the launch of ITV. The two magazines had embargo times close enough to transmission to ensure publicity from daily newspapers but not far enough away from transmission to mean that they lost their guaranteed monopoly on the first publication of future programmes. This situation generated huge sales with the Christmas 1988 edition of Radio Times achieving 11,220,666 copies - a record for magazine sales in the UK and recognised as such by the Guinness Book of Records. Increasingly, the BBC and ITV faced legal action to force them to remove the copyright and provide details upon request. The 1990 Broadcasting Act removed this monopoly and from 1st March 1991 newspapers were allowed to print billings in advance and other independent magazines - usually aimed at the cheaper end of the market - were also launched. Commensurate with that change both Radio Times and TV Times went “multi-channel”, a situation which exists to this day, although each has a subtle preference for its first station loyalty, with arguably Radio Times demonstrating this to more effect than its long-standing rival.

Inevitably the change in 1991 meant that sales were massively reduced for both magazines. Today Radio Times sells just under one million copies a week of its non-Christmas issue (down from a peak of almost nine million in 1955) while TV Times has a circulation of just under 300,000 issues, down from ten times that figure in the early 1970s.

Since 2011, Radio Times has been published by IMC (Immediate Company Limited) when the BBC Magazines division was merged into their company.

Radio Times in the regions

There are several regional editions, which each contain different listings for regional programming. All editions carry variations for adjoining regions and local radio listings.

When it began in 1923, there was just a single national edition, but from 10th October 1926 there were two editions – Southern and Northern, then on 7th January 1934 it was back to one version again. In 1949]] the North of England edition was separated from Northern Ireland who had their edition. On 8th October 1960, the Midlands edition was renamed Midlands & East Anglia, and the West of England edition was renamed South & West, and on [21st March 1964 the previously unmarked London edition was renamed London & South East. When BBC Two began on 20th April 1964, there was some "BBC-2 edition" for areas where only certain parts of a region could get BBC Two until 1966.

Radio Times started carrying ITV and Channel 4 (with S4C) listings, to begin with, they mirrored the ITV regional areas from 1st March 1991, the number of English regional editions has been reduced since the early 1990s due to there being fewer variations in the schedules, such as the Yorkshire version was absorbed by the North East version on 25th September 1993 and later added the North West version on 7th April 2007.

Before 1997, the regional variations were at the bottom of the relevant channel listings. The most recent of these was on 25th August 2007 when the Midlands and London/Anglia versions were merged. The exception to this process of merging is Wales, which used to be part of a larger Wales/West (of England) version, mirroring the HTV region, and separated on 16th April 2005 leaving the West of England to join South and South West versions together.

Radio Times is therefore the only listings magazine to have an uninterrupted run of coverage of EastEnders from the programme's launch until the present day.

EastEnders was given significant publicity on its launch, even in the North of England. Adverts were broadcast on the BBC, and promotional pictures were spread across the domain. Omnibus cast lists were only included in the magazine and blurbs were regularly used until January 1990 when the magazine started publishing episode synopsis.

The first major feature on the programme was in the issue of 22nd February to 28th February 1986 when the magazine hosted a competition for the public to win a prize to coincide with the show celebrating its first birthday. It also featured a publicity shot of Den and Angie Watts played by Leslie Grantham and Anita Dobson, something the show hadn't done since early 1985.

In the latter part of 1986, EastEnders also gained itself a front-page publicity shot for the magazines Christmas edition. Which featured a photo of Michelle, Pauline, Martin and Vicki Fowler as well as the matriarch of the Beale family, Lou Beale.

The next prominent feature on the programme came in the issue of 20th February to 26th February 1988 when a seven-page spread celebrated the third birthday of EastEnders. Another major thing that appeared in this issue was a competition to win a coveted trip to the set of Albert Square, a practise the show didn't regularly withstand. 1988 also provided more EastEnders publicity with the announcement of Pat Wicks and Frank Butcher becoming the new owners of The Vic, with page nine introducing Frank's new family. Pam St. Clement appeared on the front page of the Radio Times the following year in June 1989 to celebrate Pat's wedding to Frank.

EastEnders went to its first major publicity length in February 1990. The show was celebrating its fifth birthday. Therefore, the programme issued a fifth-anniversary souvenir issue, with seven whole pages consisting of stories and pictures from the show. An A to Z map of the Square was published along with a little teaser on the Beales and baby Steven's christening.

The next big issue came in April 1994 when EastEnders began transmitting three episodes a week rather than two. This was followed by a celebration issue when EastEnders celebrated its tenth anniversary in February 1995, and the issue featured long look backs, character profiles and the chance to win a trip to Albert Square. Patsy Palmer later earned herself the privilege of a place on the front page of the Radio Times to coincide with Bianca's and Ricky's wedding in April 1997.

The biggest feature of all time that EastEnders has had in the Radio Times was when the show celebrated its fifteenth birthday in February 2000. A special magazine was published exclusively devoted to the programme, and also coincided with the television show that was aired 15 Years of Eastenders which featured interviews with past and present cast members.

In October 2005, the return of Ross Kemp jumped straight to the front page of the Radio Times and the issue of 15th October to 21st October 2005 featured an EastEnders exclusive with the inside story of Grant and Phil's return.

The programme celebrated its twenty-fifth anniversary in 2010, and the magazine published a publicity photo of Barbara Windsor and Anita Dobson with the title of "The matriarchs who changed television". The magazine also featured trivia on Walford life.

In February 2014, Danny Dyer who plays Mick Carter gave an exclusive interview with the Radio Times earning him and Kellie Bright a publicity shot on the front page.

The most recent significant issue of the Radio Times was in February 2015. EastEnders was on the edge of revealing the killer of Lucy Beale while also celebrating its thirtieth anniversary. Rather than focusing on the memorable moments and trivia on EastEnders, the magazine mainly focused on the Lucy Beale storyline and the Beale family when Gillian Taylforth reprised her role as Kathy Beale.

A collection of EastEnders Radio Times covers throughout the show's history. 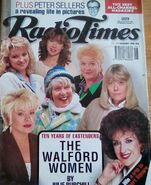 Radio Times Behind the Scenes (February/March 2000)

Additional Look-In Magazine was a children's magazine centred on ITV's television programmes in the United Kingdom, and subtitled "The Junior TV Times".

Retrieved from "https://eastenders.fandom.com/wiki/Radio_Times?oldid=195255"
Community content is available under CC-BY-SA unless otherwise noted.