Nayna Choraria
Preeti Choraria made her first appearance on 27 October 2006. She is portrayed by Babita Pohoomull.

Preeti is a beauty therapist working at a beauty parlour called La Jolie Madame, but when Tanya Branning's business starts failing, Tanya's husband Max suggests that she should poach Preeti to work at her beauty parlour, Booty, as Preeti has a large clientele. She has a one-night stand with Sean Slater when his fiancée Ruby Allen is in Venice. Sean's sister Stacey slaps her, but they later become friends.

Preeti attends Tanya's birthday party with colleague Chelsea Fox. She dresses up in high heels and enhances her breasts with padding to impress Mickey Miller, but falls over when she sees him as she is not used to wearing the shoes. When she gets up, Mickey's girlfriend, Li Chong sees the padding and announces it to the pub. Preeti runs back to Chelsea's house, distraught. On Preeti's birthday, Chelsea and Li organise an Ann Summers-style party at Stacey's house. Bradley Branning asks Preeti out after Deano Wicks is unsuccessful in chatting her up. She enters into a relationship with Bradley but he ends it because he still has feelings for Stacey. Preeti goes on a date with salesman Warren Stamp, but he attacks her, bruising her arm.

When Li manipulates Mickey into becoming an escort, Preeti teaches Mickey the finer arts of massage in an effort to get close to him. When Li discovers this, she is jealous. Li takes the opportunity to take revenge Preeti during a ruckus at party held at Shirley Carter's flat by viciously standing on her toe. Preeti flirts with Mickey when helping him find Gus Smith's dog, Wellard, who has been kidnapped. Preeti continues to have feelings for Mickey and is put out when he and Gus go on a date with twin sisters Tamara and Tonicha. Mickey, however, remains oblivious to her affections and merely sees her as a good friend. Preeti is fired by Tanya after vandals break into the salon after she forgets to lock up the night before. However, Tanya apologises to her about her behaviour and makes it up to her by offering her the position of manager. Preeti accepts her apology but does not want to take the job. She explains that it is time for her to move on, and as she leaves the Square, she bumps into a man who chats her up and she walks away with the mystery man. Preeti is not seen again but is mentioned in 2010 when Chelsea finds a toy that Preeti gave her. 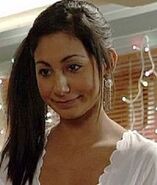 Preeti Choraria
Add a photo to this gallery
Retrieved from "https://eastenders.fandom.com/wiki/Preeti_Choraria?oldid=148149"
Community content is available under CC-BY-SA unless otherwise noted.