Not to be confused with Peter Beale, the 1993 EastEnders character.

Car crash staged by the Chapmans

Vicki Fowler
Bex Fowler
Hope Fowler
Peter “Pete” Beale (March 11, 1945 — December 9, 1993) was the ex-husband of Kathy Beale and Pat Beale and the father of long-standing Walford resident and businessman Ian and local car salesman David Wicks. He is also the son of Lou Beale and Albert Beale, as well as the twin brother of Pauline Fowler.

He was also the grandfather of Bianca, Joe, Steven,Peter, Lucy and Bobby Beale.

Pete and his twin sister Pauline were born to Albert and Lou Beale on the 11th March 1945. Pete is the elder of the two by five minutes. They were born and raised in number 45 Albert Square. Albert owned a fruit and veg stall on Walford market. Pete used to help out on the stall as a boy, and when Albert died, Pete inherited the stall. In 1957, when Pete was 12, one of his young cousins died.

Pete schooled with his neighbour and friend, Den Watts; they remained close in adulthood. In his late teens, Pete had a one-night stand with prostitute Pat Harris, she then informed Pete she was pregnant. Pete did the chivalrous thing and married Pat when he was 16; however it transpired that the pregnancy was a false alarm and Lou always felt that it was a ploy to trap her son. During the marriage, Pat gave birth to two sons, David and Simon, the former was Pete's, but the latter whom Pete believed to be his probably was not his. Yet Pat couldn't settle down. She had various affairs, including a tryst with her former lover Frank Butcher, a one-night stand with Den Watts, and an affair with Pete's older brother Kenny. Lou found Pat and Kenny in bed together and banished Kenny abroad, but Pete was unaware of the affair. Pat was also having an affair with another man named Brian Wicks. When Pete found out in the spring of 1965, he left Pat - she was six months pregnant with Simon at the time - and then went into a relationship with local girl, Kathy Hills. There was a messy divorce in 1966 and soon after, Pat married Brian and he took on responsibility of her two sons. Pete had little contact with his children following this. Pete was David's father but for the next 20 years, Pete was unaware that Simon may not have been his biological son.

A few years after leaving Pat, Pete married Kathy, although there was strong opposition from Lou, who wouldn't condone her son's divorce. And before the wedding, Pete faced the wrath of Kathy's older brother Ted Hills who tried to frame him for robbery. Den Watts helped Pete out and threatened to break Ted's legs if he did not leave Walford. A year after Pete and Kathy married, they had their only son Ian. The family did reasonably well financially and enjoyed a more luxurious lifestyle than Pete's extended family.

Pete Beale was 40 in 1985 and had run the market stall for 20 years. In late 1985, Nick Cotton broke into Dr. Harold Legg's surgery to steal drugs to sell and leafed through highly confidential patient records, one of them was Kathy Beale's. He blackmailed Kathy. Kathy later told Pete and Pete brutally beat Nick to a pulp in Bridge Street. The local policeman witnessed it and turned a blind eye. Nick used to wind Pete up by calling him Pete The Potato, due to Pete being a fruit and veg seller. In June 1986, Pete's ex-wife Pat Wicks turned up to say he was not Simon's father. In 1987, Pete was a suspect in a spate of attacks in the area and when interrogated he assaulted a police officer. In 1988, his marriage to Kathy ended after she confessed to being raped. Also, Pete and Kenny were told neither were the father of Simon Wicks but Brian Wicks was, whether this was true is not known. Pete went off the rails after his marriage broke up and was arrested for drink driving. He took a holiday to New Zealand.

In 1989 Pete dated Barbara from New Zealand. She moves to Walford to be with him, but within a couple of months Barabara begins to miss her homeland. Pete doesn't want to leave Walford and all his close family, so they split on friendly terms, and Barabara returns to New Zealand.

In 1993, Pete began dating Rose Chapman, his old schoolfriend. However she was still married to gangster Alfie Chapman. In May 1993, Pete and Rose fled Walford, on the run from the Chapman's. Alfie died from cancer later that year so his family later arranged a car crash and Pete and Rose were killed in December 1993. In December 1993, Pete was buried in Walford Cemetery.

"No, blokes that like just go borsh they don't go pickled or crystalised. When they freeze him, they'll have whiskey flavoured lollies six foot long. That's about all Reg was worth to tell you the truth." (First line) 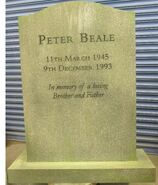 Pete beats up Nasty Nick Cotton in 1985 for blackmailing his wife. 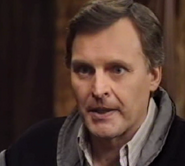 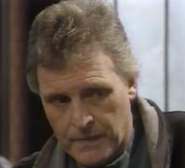 Pete in 1993, his hair a lot greyer than a few years before.

Ian Beale and Pete Beale
Add a photo to this gallery

Retrieved from "https://eastenders.fandom.com/wiki/Pete_Beale?oldid=207323"
Community content is available under CC-BY-SA unless otherwise noted.