Left to live in France with her mother.

Jack's girlfriend Ronnie Mitchell finds tickets for a ballet, which Jack says are for Penny as it is her birthday on the day of the performance and she loves dancing. Later, Jack finds a message on his answerphone from Selina, ranting about the birthday present. Ronnie answers the phone and meets Selina. At the house, while talking to Selina about the circumstances of her and Jack's relationship, Penny enters the room in a wheelchair. Selina asks Ronnie if she knows why Penny is paralysed from the waist down. Later, Jack tells Ronnie that when he was a police officer, he caught a drug dealer who deliberately hit Penny with his car when she and Selina were waiting at a bus stop, causing Penny's spine to be severed. It is later revealed that it was due to Jack being a corrupt police officer and taking payment from a drugs baron in return for tip-offs. When Jack was unable to tip off the baron and he was arrested, one of his associates carried out the attack in revenge.

Jack takes Penny and Selina out for Penny's birthday and they go back to Selina's flat and kiss. Selina reveals the next day how upset Penny was that Jack was not there when she woke up. Selina decides to move to France where her parents live and takes Penny with her. Penny visits Jack in April 2008 and is cold towards Ronnie, preferring her aunt Tanya Cross, with whom she goes shopping. Tanya cooks Penny a farewell meal, but Ronnie still struggles to bond with her. She decides that she does not want to return to France but is persuaded to go back to Selina by Jack. In March 2010, Ronnie asks Jack about Penny and he says she is doing fine without him and that Penny made the right decision to go to France. In October 2013, Jack moves to France to reconnect with Penny, briefly returning to Walford for a visit during Christmas 2015. After Jack permanently returns to Walford, Penny calls Jack in December 2016 to tell him she cannot attend his second wedding to Ronnie because of a doctor's appointment in Paris.

In 2020, Penny was mentioned by Max Branning when Max and Jack were having a fight. 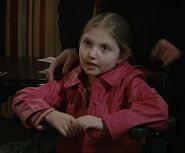 Penny with Tanya Cross and baby Oscar Branning.
Add a photo to this gallery

Retrieved from "https://eastenders.fandom.com/wiki/Penny_Branning?oldid=207012"
Community content is available under CC-BY-SA unless otherwise noted.