Former; regular
Paul Priestly made his first appearance on 20 April 1989. He is portrayed by Mark Thrippleton.

Paul was originally from Leeds, Paul came to London with a building firm he worked for.

Paul arrives in Walford in April 1989 in search of a place to stay and soon begins lodging with the Butcher's at The Queen Victoria public house.

Paul has quite an impact on the ladies of Walford, particularly the schoolgirl Diane Butcher, who is instantly attracted to him. Her father Frank Butcher becomes extremely worried about all the attention she gives Paul. His fears are mistakenly realised when Paul takes Diane to a Deacon Blue concert and they are both assaulted on their way home by a gang of violent thugs. As the gang team up on Paul, Diane is struck while attempting to fend them off. She runs home to the Vic to get help, however Frank immediately assumes that Paul is the one who has struck her. When Paul escapes the thugs and returns to the Vic, he is greeted by a furious Frank, who knocks him to the floor with a punch. Only after Paul has fled in fear does a hysterical Diane manage to explain what had really occurred. Frank is forced to apologise for his overreaction and as Paul is relatively laid back, he does not bear him any grudges. Paul and Diane begin dating, although spending time alone together is almost impossible with Frank watching their every move, not to mention Mo Butcher — who takes to standing guard outside their bedrooms at night to stop any secret liaisons. While Diane quickly falls in love with Paul, it is not nearly as serious for him.

In June 1989 Paul's friend Trevor Short comes to Walford in search of him. He and Trevor had shared a room together briefly at a youth hostel. Trevor is a dim-witted, needy individual who idolises Paul. Paul is not exactly thrilled to see Trevor initially, but soon comes round to the idea of having him around. When Paul decides to take on some freelance work, he employs Trevor as a builder's aid, although he is more of a liability than a labourer and makes many disastrous mistakes. Paul finds a fair bit of work around Walford, his first big job being the conversion of Julie Cooper's salon. Julie takes a shine to Paul and while Diane is waiting for Paul to take her on a romantic date, Julie seduces him and they have sex. Paul continues to mess Diane around, standing her up on several occasions to be with Julie. Diane is devastated by his sudden rejection, but she places the blame entirely on Julie. Meanwhile, Paul soon begins to feel that Julie is merely using him in order to get a cheap deal for his labour and he begins to take against her flirtatious behaviour towards other men. He dumps her and refuses to finish the salon conversion. Julie, who only saw their fling as a bit of fun, is not particularly bothered about the end of their affair, but refuses to pay him for his prior work unless he finishes the salon, so Paul is forced to continue. Immediately after finishing with Julie, Paul returns to Diane and she willingly takes him back. She will not forgive Julie however, and plays various vengeful tricks on her as payback.

Paul finds work redecorating Ashraf Karim's property, which is hindered somewhat by the ineptitude of Trevor, who causes the property's ceiling to collapse. Paul and Diane's relationship continues, but it soon becomes obvious to everyone that Paul is losing interest in her. Oblivious to this, Diane's feelings only strengthen and she even invites him away for a weekend alone together, indicating that sex will be on the agenda. Paul, who still has Frank watching his every move, declines the offer, but Diane is not perturbed and by the end of the year she has got it into her head that Paul wants to marry her. Actually the relationship has grown far too serious for Paul's liking. He begins to tire of living in London and longs for his old life and the people back up north. After finishing the Karim's property he breaks the news that he is leaving to Trevor and hints that it is unlikely he will return. Meanwhile, Diane is adamant that Paul is about to propose and even instructs Trevor to show Paul the engagement ring she wants. Trevor tries to convince Paul to tell Diane that he is leaving, but Paul cannot pluck up the courage to do it and says his goodbyes to everyone but her. Eventually Trevor informs Diane that Paul is leaving and she reacts with anger and disbelief. She goes in search of him and sees him waiting at a bus stop. She calls out to him, but Paul merely glances at her before getting on a bus and leaving.

Diane is devastated to lose Paul and in January 1990 (on her sixteenth birthday) she runs away from home without trace. Frank blames Paul for her disappearance and goes to Leeds to track him down, thinking that Diane is with him, but his search is fruitless. He is told that Paul has not been there recently and no one knows where he is. Frank becomes so desperate to find Paul that he hires a private detective, and is in the process of being conned by him when Paul coincidentally turns up in Walford. He reveals that he had spent some time in America, and knows nothing of Diane's whereabouts. He feels guilty about the way he'd treated Diane and has come back to put things right. After some heavy interrogation from Frank, Paul reveals that he spoke to Diane on the day she ran away. She had asked to come to Leeds to see him, but Paul had refused and promised to come to Walford when he had more time. Frank eventually accepts that Paul is telling the truth.

Trevor is overjoyed to see Paul again, but his happiness is fleeting as Paul soon announces that he is leaving once again, and this time for good. Seeing how upset Trevor is about this, Paul asks him to join him in his hometown of Leeds. Trevor gratefully accepts and leaves with Paul in March 1990. 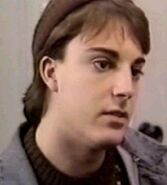 Paul Priestly
Add a photo to this gallery

Retrieved from "https://eastenders.fandom.com/wiki/Paul_Priestly?oldid=162841"
Community content is available under CC-BY-SA unless otherwise noted.