This special episode revealed what caused the feud between Pat Evans and Mo Harris that lasted until Pat's death. Pat and Mo meet at the grave of Pat's brother and Mo's husband, Jimmy Harris, and reminisce about old times through a series of flashbacks. Mo's brother, Stan Porter also appeared in the episode. 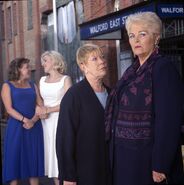 Mo and Pat
Add a photo to this gallery

Retrieved from "https://eastenders.fandom.com/wiki/Pat_and_Mo?oldid=144136"
Community content is available under CC-BY-SA unless otherwise noted.