Once Upon a Time in Albert Square

Once Upon a Time in Albert Square is the Children In Need 2018 special.

The cast of EastEnders is set to spread some movie magic across Albert Square on this year’s BBC Children in Need, with a delightful Disney medley to celebrate Mickey Mouse’s 90th anniversary.

In what is the most dazzling EastEnders medley yet, the cast will be taking on the roles inspired by classic Disney characters performing in The Square. There’s an added sprinkle of Disney animation and special effects bringing extra magic to the scenes, including an incredible flying carpet.

The medley will also feature songs such as Friend Like Me from Aladdin Genie, whilst also entertain viewers with an unforgettable performance that will take centre stage as they perform the hit song Let It Go from the much loved Frozen. Also not to be missed, another breathtaking performance as Belle from Beauty And The Beast with Gaston and LeFou.

The musical performance culminates with interacting with the ‘True Original’ Mickey Mouse in a bid to share the magic!

This magical musical medley follows a great tradition by BBC Children in Need of taking on the challenge of transforming much loved musicals and films - from Star Wars to James Bond - all for a truly fantastic cause.

Viewers will be able to watch the full medley on BBC Children in Need’s 2018 Appeal Night which starts on 16 November on BBC One at 7.30pm.

In order of appearance

Zack Morris
Add a photo to this gallery

Zack Morris as Aladdin
Add a photo to this gallery 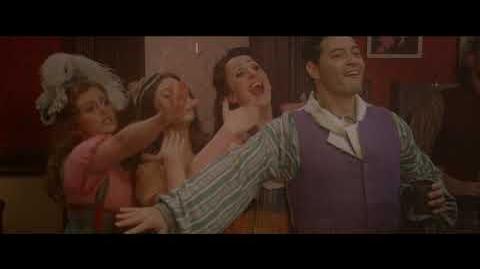 Once Upon a Time in Albert Square 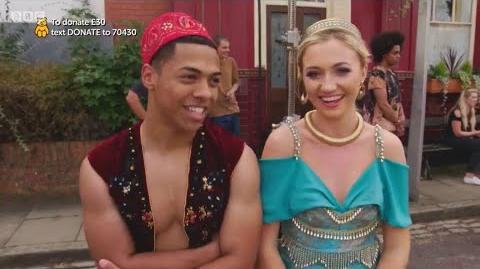 Once Upon a Time in Albert Square - Behind the Scenes
Add a photo to this gallery
Retrieved from "https://eastenders.fandom.com/wiki/Once_Upon_a_Time_in_Albert_Square?oldid=141826"
Community content is available under CC-BY-SA unless otherwise noted.