Jade Green
Jimmy Wicks
Oliver "Ollie" Michael Stanley Carter is Mick and Linda's youngest son. He made his first appearance on the 12th May 2015, after being prematurely born two months early.

In September 2014, Linda Carter was raped by her partner's brother, Dean Wicks. Shortly after, Linda discovered she was pregnant. However, not long after his birth, it turned out that the baby was Mick's and not Dean's. He was born prematurely just like his second oldest brother, Jonathan Carter (Johnny).

In an episode set on Friday the 8th of May, Linda and Mick have an argument. When Linda attempts to run after Mick and apologise, she falls down the stars and lands on her belly. When she regains consciousness, she discovers she cannot feel the baby, although her waters have broken. A crying Linda is found in the street calling out for Mick by Kat Moon and Sonia Fowler. Kat and Sonia rush Linda to the hospital, where she gives birth to a baby boy. When Mick becomes doubtful over the paternity of Ollie, he takes a blood test. The blood test reveals he, Linda and Ollie are all of the 'O' blood type, whereas Dean's does not match - making Mick the dad. 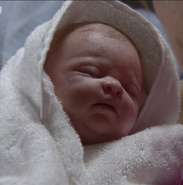 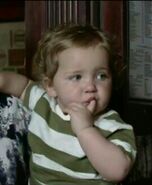 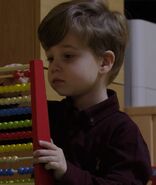 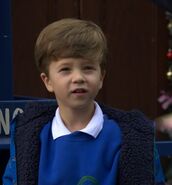 Ollie Carter
(4 December 2020)
Add a photo to this gallery

Retrieved from "https://eastenders.fandom.com/wiki/Ollie_Carter?oldid=202034"
Community content is available under CC-BY-SA unless otherwise noted.