Moved to India with Robbie Jackson

Samir Mistry
Nita Mistry made her first appearance 26 November 2001. She is portrayed by Bindya Solanki.

Nita was born in Mumbai, India. She is a widow.

In 2003, Nita gets an offer from her family in India, asking her to return home and they will support her and Anish. Nita takes up her parents offer to return to Mumbai and leaves Walford with her partner Robbie and son Anish.

Robbie returns to Walford in 2010, for his sister Bianca Jackson's wedding to Ricky Butcher. Robbie reveals that Nita cannot make the ceremony because she's 6 months pregnant. Nita gives birth to a boy, Sami. Robbie returns again in 2015 with Sami and announces that he and Nita have separated. 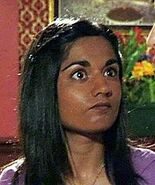 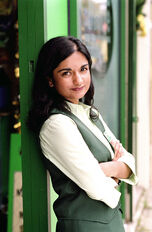 Nita Mistry
Add a photo to this gallery
Retrieved from "https://eastenders.fandom.com/wiki/Nita_Mistry?oldid=160879"
Community content is available under CC-BY-SA unless otherwise noted.