Belinda Peacock
Neville Peacock made his first appearance on 9 May 2016. He is portrayed by Gary Webster.

Nevil has been mention numerous times.

Neville is first seen when he arrives home with his wife Belinda Peacock one night. Belinda sees Mick Carter in their garden with his son Johnny Carter. They are returning Neville and Belinda's koi carp that Mick's father Buster Briggs had stolen. The next day, Belinda invites Mick and his wife Linda Carter back to their house for dinner. Mick and Linda arrive as Belinda and Neville are arguing. Neville reveals to Mick that Belinda has a crush on him and invites him into the hot tub. After joining Neville in the hot tub, Mick feels uncomfortable when Neville reveals he is naked and suggests they wife swap. Mick declines but Neville threatens Mick with CCTV footage of him and Johnny.

Mick goes back to the house and tells Linda. They tell Neville and Belinda, both in the hot tub, that they need to leave, so Neville repeats his threat. Linda calls Neville "sick", saying he wants control over women and his relationship lacks real intimacy. Mick and Linda leave, but Belinda gets into their car and says she wants to leave Neville. They return to Mick and Linda's home in The Queen Victoria pub, where Neville arrives. Belinda tells him she is leaving him so he blames Linda for putting ideas in Belinda's head. He offers to take her on holiday but she says he never makes her feel beautiful, they never speak and she has to start arguments to get his attention, so she does not feel loved. Mick and Linda tell Neville to leave, so Neville insults Belinda's looks, but says he took his wedding vows seriously so she should come home. Mick punches Neville and ejects him from the room.

When Belinda receives a letter saying Neville has filed for divorce, she meets him with Mick in the café. She asks him for half the value of their house, but he says they should take out of the marriage what they put in and he is the one who paid the mortgage. He also says he has nothing to give her as he still has mortgage debt to pay. Mick says this is probably a lie and Neville probably has a dodgy accountant covering up his true worth. Mick says he would tell a court about Neville's penchant for swinging and his clients would find out, so Neville agrees to giving Belinda £50,000 or going to court. She agrees and when Neville leaves, she tells Mick she can get more. 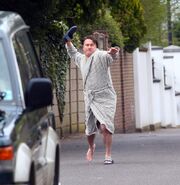 Neville Peacock
Add a photo to this gallery
Retrieved from "https://eastenders.fandom.com/wiki/Neville_Peacock?oldid=156532"
Community content is available under CC-BY-SA unless otherwise noted.