Jack Evans
Nathan Williams made his first appearance on 13 November 2001. He is portrayed by Doug Allen.

Nathan is the illegitimate son of Roy Evans, born, unbeknownst to Roy, out of an extramarital affair with his former employee Jane Williams. Nathan makes his first appearance in Albert Square in 2001, after his mother, who is terminally ill with cancer, confesses to Roy that Nathan is actually his son.

Nathan initially refuses Roy's attempts to get to know him. However, after Jane dies (on the same day that Roy's grandson Jack was born), Nathan is left penniless with a bankrupt business, so he begrudgingly turns to Roy for help. Soon after, he moves in with the Evanses, much to the annoyance of Roy's other son Barry, who resents Nathan and is furious with his father for betraying his dead mother. It also becomes clear that Nathan equally dislikes Barry and resents the fact that he had known and been brought up by his father, whilst he has only just met him. The pair spend much time winding each other up, with Barry usually ending up looking the fool.

Nathan quickly integrates into life in Albert Square, growing closer to his father and having a brief relationship with Walford resident Melanie Owen. He starts working in the car lot with Roy, whilst Barry stays at home playing at house-husband and looking after his son Jack. Barry resents him even more for this and feels that Nathan is taking over his role as dutiful son. It seems as if Nathan can do no wrong, but it is the petty jealousy and sibling rivalry between him and Barry that is eventually his undoing.

In an attempt to exclude Barry and take his place in his father's heart, Nathan makes a plan to set Barry up and steal the affections of Barry's wife Natalie. His first advancement towards Natalie results in the pair kissing, but Natalie is adamant that it will go no further and despite further flirtations from Nathan, their kiss is a one-off occurrence. Undeterred, Nathan continues with his plan. Aware of Barry's past monetary blunders, and knowing that any subsequent mistakes will not be tolerated by Roy, Nathan steals money from the car-lot and sets Barry up for the blame. The plan seems to be working, until Natalie pieces it together and uncovers his ploy. With Nathan's true character unveiled, Roy decides that he wants nothing more to do with him and Nathan is banished from Albert Square in mid-2002. 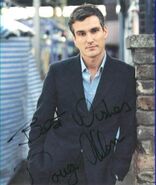 Nathan Williams
Add a photo to this gallery
Retrieved from "https://eastenders.fandom.com/wiki/Nathan_Williams?oldid=157392"
Community content is available under CC-BY-SA unless otherwise noted.