EastEnders Wiki
Register
Don't have an account?
Sign In
Advertisement
in: Characters, Introduced by Tony Holland and Julia Smith, Female Characters,
and 7 more

Asian Naima tries to embrace Western culture, but this isn't easy since her family constantly try to force her to adhere to their ancient customs. Sick of being forced to live in an arranged marriage with a husband she loathes, Naima makes a stand and shames her family by filing for a divorce.

Naima runs a corner shop on Bridge Street with her husband Saeed Jeffery. Her parents were originally from Bangladesh, but she was born in England. Naima and her husband are on the receiving end of racial abuse and vandalism from the neo-nazi group that includes Nick Cotton , which make life in Walford particularly unpleasant for them both.

Naima was sent to Walford for an arranged marriage with Saeed. The two don't get on and Naima becomes unwilling to adhere to Muslim customs, regularly disobeying her husband's wishes and refusing to share his bed. Saeed starts visiting prostitutes and regularly goes to the strip-club where Mary Smith works. He later makes obscene phone calls to Naima's good friend Debbie Wilkins . When Naima is tipped off by an anonymous letter from Dot Cotton , she is disgusted with Saeed and decides to go against her family's wishes and divorce him. After Saeed leaves in December 1985, Naima makes a determined effort to embrace Western culture and feminism. She stops wearing saris, learns to drive, cuts her hair short and moves into a flat with Debbie . With her new look, Naima starts attracting a lot of male attention on the Square and even dates Walford lothario, Simon Wicks, as well as Dr Jaggat Singh , but neither relationship develops into anything serious.

Naima's family persist in sending her more cousins to marry and in 1986, Rezaul Gabir arrives in England. He lives and works with Naima, reporting her every move to her parents. Naima protests, but as her parents are funding her business, she has to put up with Rezaul. He is arrogant and pretentious, making him and Naima clash immediately. Naima realises her family are attempting to set Razaul up as her new husband and she refuses to oblige. Angered by their daughter's defiance, Naima's parents cut off all funds. This leaves Naima struggling to pay her rent and forces her to move into the Fowlers' home for a while.

In 1987, Farrukh, yet another cousin, is sent over to woo Naima. Farrukh is an important politician in Bangladesh and despite Naima's initial protests, she is drawn to him. Farrukh is different from her other suitors, supporting her independence, so she agrees to marry him. They marry in Birmingham and leave Walford for Bangladesh in November 1987.

"He didn't come in for his milk. For three days!" (First line, about Reg Cox to Pauline Fowler)

"I've left a few presents and a letter for Pauline and Arthur. Tell them I'll miss them. I'll miss Walford too. We're getting married on Saturday. Where he goes, I go." (Final line, to Lou Beale) 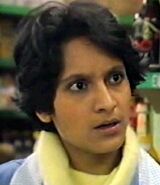 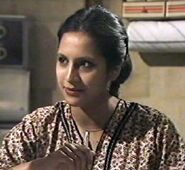 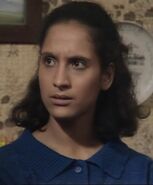 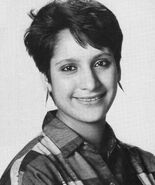