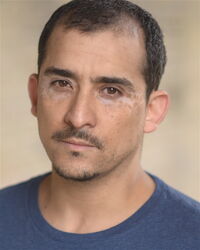 He grew up in North Kensington, a child of immigrants from North Africa. He attended Holland Park school in which the school occasionally took them to the theatre which was what inspired Nabil to become an actor.

Nabil kick-started his career in 1996 when he guest starred in the popular drama serial The Bill he then went on to appear in London's Burning, Ali G Indahouse, Attachments, Deserter, The Sum of All Fears and In This World before landing a party in the 2002 Only Fools and Horses special.

Since leaving EastEnders, Nabil has gone to Generation Kill, Hammered, Top Boy, The Night Of, Casualty and Deep State, his last televised credit was Thunderbirds Are Go in 2018, and one of his projects is under post-production.

When Nabil isn't acting, he has a job driving for the NHS. He takes doctors to patients.

Retrieved from "https://eastenders.fandom.com/wiki/Nabil_Elouahabi?oldid=149624"
Community content is available under CC-BY-SA unless otherwise noted.