Flo
Maureen "Mo" Butcher made her first appearance 1 September 1988. She was the mother of Frank Butcher. One of Mo's major storylines was her dementia storyline in 1990. She is portrayed by Edna Dore.

Mo was born in Walthamstow in 1910. During her teenage years she married Chike Butcher who worked for London Transport. Chike got promoted to transport inspector at the age of forty-five, and Mo felt she had achieved status. They had two children, Frank Butcher and Joan Garwood. Following Chike's death, Mo never remarried; she busied herself with caring for Frank's children, particularly when their mother June died in 1987.

Mo moves to Albert Square in September 1988 to be near Frank and his family. She disapproves of the way Frank is raising his teenage children Ricky and Diane Butcher and immediately clashes with his fiancée Pat Wicks, bringing up her past reputation as a prostitute and threatening to put a halt to their impending marriage. During her time in Walford Mo has an array of jobs; she first works in the kitchens of The Queen Victoria, then on Arthur Fowler's fruit and veg stall and then in Ali Osman's café. However all her jobs come to an end due to her interference, causing her employers no end of grief.

Fiercely loyal to her family, Mo sticks by her son through his financial woes and tries her best to help him out by offering Frank her late husband Chike's life insurance money. She is shown to be extremely fond of her favourite grandchild Janine Butcher and takes a hand in persuading Frank to bring her to Walford to live with him in 1989 (Janine had previously been living with Frank's eldest daughter Clare outside Walford). Despite being protective and doting on her family, Mo is not blinkered to their faults, even in a rare moment supporting Pat in her decision to put Janine in therapy when her behaviour becomes out of control. Mo eventually warms to Pat, seeing that Frank does love her, and arranges for them to be married in great East End style, complete with a horse and carriage, Pearly Kings, a street party and jellied eels.

Her busybody attitude results in few friendships in Walford for Mo, but she becomes close to Marge Green, despite belittling her. Together they participate in the Walford Brownies, but Mo (a Brown Owl) is sacked for lying about her age. She also takes on the local council over the proposed closure of the community centre. One time, she even blanched at Grant Mitchell calling her "Mum" as a joke.

In 1990, she becomes increasingly forgetful, and is eventually diagnosed with Alzheimer's disease after flooding the B&B and setting fire to the house. Phil Mitchell evens finds her confused in his garage. Frank feels unable to look after her, and sent her to live with his sister Joan, who looks after Mo in Colchester until her death on New Year's Eve 1992, aged 82.

After Frank dies in 2008, his solicitor reads the will in the Vic and presents Janine with Mo's diary from 1990, which is left to her as per Frank's instructions. 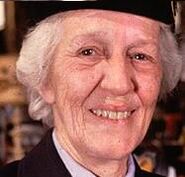 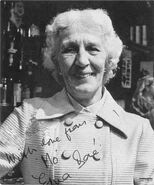 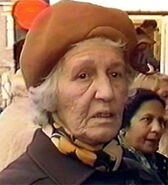 Mo Butcher
Add a photo to this gallery

Retrieved from "https://eastenders.fandom.com/wiki/Mo_Butcher?oldid=192134"
Community content is available under CC-BY-SA unless otherwise noted.