Former; guest
Mike Rendon made his first appearance on 21 October 2016. He is portrayed by Bailey Patrick.

Mike Rendon is a drug dealer who Jay Brown owes money to. He watches Jay as he works at Coker & Sons Funeral Directors. Later in the week, Mike watches as Jay takes Will Mitchell and Dennis Rickman Jnr home, and Dennis notices him staring at them. Jay later meets up with Mike and gives him some of the money from the safe at the funeral home. Mike tells Jay that he owes him interest and gives him two weeks to pay the rest of the money, threatening to kill him otherwise. 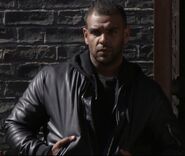 Mike Rendon
Add a photo to this gallery
Retrieved from "https://eastenders.fandom.com/wiki/Mike_Rendon?oldid=64975"
Community content is available under CC-BY-SA unless otherwise noted.