Wellard
Mickey Miller made his first appearance 15 April 2003. He is portrayed by Joe Swash.

Mickey is the son of Mike Swann and Rosie Miller. Mike left the family when Mickey was just three years old. He grew up with his sister Dawn and later his half siblings Demi and Darren Miller. He has always considered his mother's long-term partner, Keith Miller, to be his father, and uses his surname

Mickey is first seen in Walford in 2003, selling dodgy goods to Spencer Moon and he is later involved in similar money-making scams with fellow wheeler-dealer, Mo Harris. To earn extra money, he works as a builder and sells trinkets on Bridge Street market, aided by his business partner, Juley Smith. In December 2003, Mickey goes on a trip to Scotland in a minibus with Zoe Slater, Kelly Taylor, Gus Smith, Spencer Moon, Sonia Fowler, Martin Fowler, Vicki Fowler, Tariq Larousi and Ronny Ferreira and Kareena Ferreira. Mickey crashes the bus on a moor, nearly killing Zoe.

Mickey begins a relationship with Kareena Ferreira in 2004. Mickey falls for Kareena, but he is incensed in 2005 when he discovers that she has been using cocaine, supplied by Juley. When Kareena sees Stacey Slater attempting to seduce Mickey, she turns to Juley for comfort, and a fight breaks out when Mickey catches Juley attempting to kiss her. Mickey and Kareena manage to work through their problems, but shortly after Kareena leaves Walford with the rest of her family, despite previously promising Mickey that she will stay with him.

When Mickey visits his sister Dawn in France in 2005, he was surprised to discover that she is living with their biological father, Mike. Mickey is unimpressed with his father's sudden return; he refuses to forgive Mike for his prior neglect, and they fight when Mike makes derogatory comments about Rosie. Mike tries to make excuses for his absence, but Mickey refuses to believe him. They eventually call an uneasy truce, but Mike alienates his son further when he tries to con his friend Minty Peterson out of his life savings. Mickey enters into a relationship with Li Chong in 2007, and they eventually both move into Gus Smith's flat. Li often tests the relationship, infuriating Mickey by growing cannabis in their closet, and then involving him in a money-making scam by advertising him as a male escort without his consent. With persuasion, Mickey agrees to do the male escorting, but Li proves too jealous of his flirtations with other women, so their scam soon ends. Li abruptly ends the relationship when Mickey starts getting too serious for her.

Mickey becomes the victim of bullying from Sean Slater in May 2008, who does such things as assaulting Mickey and vandalising his property. Mickey is too scared to take any action against Sean, and relies on his sister's boyfriend, Jase Dyer, for protection. On June 18, 2008, he is knocked out when Dr. May Wright hits him over the head with a crowbar, whilst trying to steal Dawn's baby, Summer. When Micky awakes, he manages to stop May from absconding with Summer, but she subsequently causes a gas explosion, and the Millers' house goes up in flames. Mickey, Dawn and Summer are trapped in a first floor bedroom. When Mickey attempts to pass Summer out the window to the awaiting crowd below, he loses consciousness and drops her, though she is caught by Jase. Dawn pushes an unconscious Mickey out the window, saving his life. May is killed in the explosion. Mickey discovers a letter from Rosie, offering Keith a job as a concierge at her home in the Cotswolds. All of the Millers are angry at him for not acknowledging the letter, and Mickey decides to take the job instead as he says there is nothing left for him in Walford. Later, along with Keith and their dog Genghis, Mickey leaves Walford after an emotional farewell at The Queen Victoria pub.

In September 2011, Mickey returns for Darren's wedding to Jodie Gold. He attends the stag night and flirts with Jodie's friend Poppy Meadow and accidentally reveals to her that Darren has had sex with bridesmaid Lauren Branning. Mickey helps Darren prepare for the wedding the following day and arranges for a car to drive them to the registry office. But Darren's guilt over having sex with Lauren causes him to call the wedding off. Mickey goes for drinks at the pub with Darren and his wedding guests. He tells Darren that he has grown into a young man and is proud of him, before leaving. 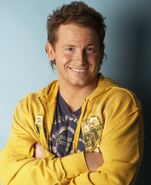 Mickey Miller when he returned in 2011

Mickey Miller - Name Card
Add a photo to this gallery
Retrieved from "https://eastenders.fandom.com/wiki/Mickey_Miller?oldid=181668"
Community content is available under CC-BY-SA unless otherwise noted.