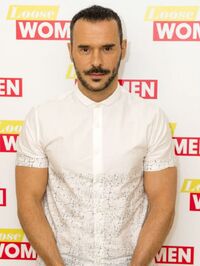 Michael Greco is a British actor and poker play who appeared as hunk Beppe di Marco in EastEnders from 1998 to 2002.

Greco was educated in Surrey, England at St. Bede's School in Redhill and afterwards at Reigate College where his acting talent was noticed and gained him admission into the prestigious Guildford School of Acting. It was here he gained his acting diploma in 1992. Greco played Beppe di Marco in EastEnders from 1998 to 2002. He also played Billy Flynn in the London West End's Chicago. Internet rumours claim he was born in Dunbar, Scotland, but Greco says that he grew up in London. In 1999 and 2000 Greco won the British Soap Award for the Sexiest Male for his role on EastEnders. In July 2004 Greco was voted the sexiest male soap star ever by readers of the Radio Times and he was ranked number 66 in the 100 Greatest "EastEnders" Characters of All Time for his performance as Beppe di Marco. Greco now lives in Los Angeles and has recently appeared alongside Kevin Costner in the three-part film Hatfields & McCoys.

Retrieved from "https://eastenders.fandom.com/wiki/Michael_Greco?oldid=149615"
Community content is available under CC-BY-SA unless otherwise noted.