Mica was born in The Minute Mart after Phil Mitchell had accidentally locked him, and his mother Kim Fox-Hubbard in a storage unit. Kim's water broke whilst both her and Phil were locked inside the unit, which quickly resulted in panic. Kim phoned the ambulance and the midwife on the phone was trying to direct her and tell her what to do, however half-way through Kim's phone died resulting in Phil having no other choice but to deliver the baby.

Kim leaves Walford in July 2019 with Pearl and Mica because she has an offer in Scotland as a tour guide. Mica returns in November 2020 but is not seen until late December. 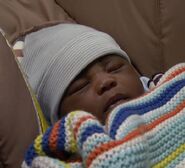 Add a photo to this gallery
Retrieved from "https://eastenders.fandom.com/wiki/Mica_Fox?oldid=199699"
Community content is available under CC-BY-SA unless otherwise noted.