Mehmet is a Turkish Cypriot and the older brother of the original owner of the Bridge street café, Ali Osman. He is first seen in Albert Square in June 1985 when he takes part in one of Ali's regular late-night poker games. Like his brother, Mehmet is a serial gambler and whenever he gambles the stakes are often foolishly high. Unlike his brother, Mehmet doesn't live in Walford but Stoke Newington.

In June 1986 Mehmet and Ali start a cab firm called 'OzCabs' from a corner table in Ali's Café. Mehmet is married with three children, but monogamy is one sanctity of marriage that he is more than willing to overlook. Later that month punk Mary Smith  catches his eye, and so he bets his sceptical brother £10 that he can get Mary to have sex with him. Mary is well aware that Mehmet's intentions are dishonourable and initially refuses to have sex with him, but Mehmet persists and she finally relents and spends the night with him. A triumphant Mehmet then collects his winnings and gloats to his brother in the café. However, Mary overhears their entire conversation and she then sets about trying to get revenge on him by hoax calling his cab-firm and vandalising his car. Later in the year Mehmet acts as Pat Wicks' pimp, setting her up with clients on a regular basis and he even persuades Pat to convince Mary to go prostitute herself too. He also gets involved in Kathy Beale's  Knitting business, later conning her and disappearing with all her profits. After he gets into more trouble with his customers for overcharging on fares and then trying to seduce Hannah Carpenter  — the wife of his employee — the residents of Albert Square decide to confront him. Den Watts, Pete Beale and Tony Carpenter find him and give him a severe beating which involves having his arms pinned behind his back whilst taking a number of blows to the stomach.

Mehmet proceeds to make things infinitely worse for himself soon after, when he stakes his house and business on a bet, loses and swiftly disappears leaving his wife, Guizin, to face up to the consequences. A then homeless Guzin arrives at Ali and his wife Sue's doorstep with the news that Mehmet had beat her and she isn't ever returning to him. Ali and Sue are forced to take Guizin and her three children, Murat, Rayif and Emine into their one bedroom apartment. Mehmet returns to Walford in May 1987 and he manages to persuade his long suffering wife to give their marriage another chance. However, his promises to Guizin prove to be hollow as soon after he decides that the barmaid Donna Ludlow  is to be the next sexual conquest. Donna refuses his advances, but can't resist informing Guizin about his offer and Guizin and Donna nearly fight on New Year's Eve that year. Guizin and Mehmet's marriage is highly turbulent and they are always involved in intense arguments, mainly concerning money and gambling. In 1988 Mehmet and Guzin become partners in Ali's café after Sue gives up working to look after her baby.

Mehmet often clashes with his wife about the amount of time he takes off to gamble and the way the café is run. Later in the year Mehmet and Ali run up huge gambling debts to Joanne Francis, manageress of Strokes wine bar, and who is also a member of the criminal underworld known as The Firm. Desperate for money the two turn to their café employee, Ian Beale, for a loan. He agrees, but charges his employers 10 percent interest and later, when they cannot meet the repayments, he demands a stake in the café. The brothers refuse, but the debt eventually leads to Ali losing the café to Ian the following year.

Mehmet's marriage goes through some more trouble in 1989, when Ali's wife, Sue, discovers that her husband had been having sex with prostitute, Donna Ludlow. Sue is traumatised by this news and turns to Mehmet for comfort. Seeing her chance for revenge Sue makes a pass at Mehmet, purposefully kissing him in Ali's view. For once Mehmet is innocent, but Ali refuses to believe this and the brothers have a massive fight. Ali divulges Sue and Mehmet's fabricated affair to Guzin, who is unable to forgive her husband's latest infidelity with her sister-in-law. 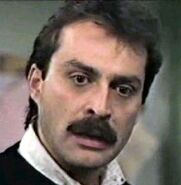 Add a photo to this gallery
Retrieved from "https://eastenders.fandom.com/wiki/Mehmet_Osman?oldid=168559"
Community content is available under CC-BY-SA unless otherwise noted.