May Wright - Killed herself by gas explosion

May arrives in Walford, taking over from Dr. Oliver Cousins as GP. Several weeks later, it is revealed she is married to Rob Minter who is dating Dawn Swann. May and Rob are separated when Rob starts dating Dawn but he ends it when May asks him to give their marriage another go and they are trying for a baby by IVF. May reveals she once miscarried at six weeks before learning that Dawn is expecting Rob's baby and that her fertility treatment has been unsuccessful. The doctor tells May that she is not ovulating and therefore unlikely to conceive. Desperate for Rob's baby, May offers Dawn £10,000 to go ahead with the pregnancy and Dawn agrees.

However, May and Rob plan to con Dawn by claiming he loves her and suggest they raise the baby together. Rob leaves May for real, filing for divorce when her behaviour becomes increasingly erratic and irrational. May reacts by taking pills intended for patients but when challenged, accuses nurse Naomi Julien of stealing the pills and forces her to leave the Square.

May seduces Rob and they reconcile. Lulling Dawn into a false sense of security, Rob proposes and she accepts. He takes her to his parents' house, where May is waiting. Rob restrains Dawn while May drugs her and threatens to perform a caesarean if Dawn does not co-operate. Dawn manages to escape to Walford, to May's fury but doesn't stay as she knows Rob will come looking for her and leaves for the Cotswolds. However, she goes into labour on the tube, naming her daughter, Summer. Dawn tells the hospital not to admit Rob but May tells the hospital staff that she is Dawn's GP and wants to leave a card for her, planning to take Summer with her when she leaves but Dawn wakes up. May asks Dawn to let her take the baby, doubling her original offer, but Dawn refuses so May leaves alone. May later visits Dawn, asking to see Summer and offering her the toys and baby clothes she had collected during Dawn's pregnancy. Dawn calls the police and allows May to see Summer until the police arrive. She is arrested on suspicion of attempted kidnap.

She returned a year later on Summer's 1st birthday. She hit Mickey with a crowbar, and later Mickey, Dawn and Summer locked the door and trapped in a room, May tried to use a crowbar to get in, but finding this impossible, she committed suicide by lighting a cigarette while the gas was on which exploded the entire house which trapped Dawn, Mickey and Summer.

May's exit was revealed to be in the "Going Out With A Bang! category in EastEnders: Greatest Exits on BBC Three in 2011. 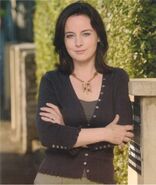 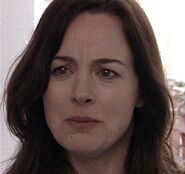 Dr. May Wright - Name Card
Add a photo to this gallery
Retrieved from "https://eastenders.fandom.com/wiki/May_Wright?oldid=144959"
Community content is available under CC-BY-SA unless otherwise noted.