Jay Mitchell
Ben Mitchell
Maximum Motors is the car lot that the people of Walford buy second hand cars from.

It was closed in 1983 by an unknown owner but re-opened by Pat Evans and Frank Butcher in 1989 and later Roy, and Barry Evans bought it in 1995 after Frank burnt it down the year before. Roy and Barry called it Evans & Son.

It was later sold it to Jack Branning who sold it to Janine Butcher who called it Janine Cars and then sold it to [[Archie Mitchell] who called it Mitchell Executive Motors. When Archie was murdered he left it to his daughter Roxy Mitchell Who Killed Archie Mitchell? who later rents it to Max Branning and he plans to go into partnership with Bradley Branning but after Bradley dies, Max goes into partnership with his brother Jack, who later sells his shares to David Wicks who also buys the Free-hold off Roxy and replaces the Office then later leaves and takes his money out of the business. Phil Mitchell later cons Max into handing the business over to him.

In April 2016 Phil smashed up the car lot. It ceased trading. In September 2017, the car lot was gifted to Jay Brown by Phil. The following month, Weyland & Co bought it off Jay. After Fi Browning disowned her father after finding out that he was planning to build flats over Albert Square, she gifted it to Max Branning. In April 2018, Max re-opened the car lot 2 years after it had closed as Maximum Motors. In May 2019, it was revealed that Jay Mitchell still owns the land that Maximum Motors is on and therefore Max and Rainie were thrown out and Jay took over the business in partnership with Ben Mitchell

Evans and Son Mini-cab and Car Lot inside. 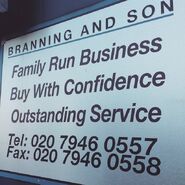 6 Albert Square Land Registry
(9 May 2019)
Add a photo to this gallery
Retrieved from "https://eastenders.fandom.com/wiki/Maximum_Motors?oldid=134809"
Community content is available under CC-BY-SA unless otherwise noted.