Ronnie's sister Roxy Mitchell looks after her nephew with the help of her partner Aleks Shirovs when Charlie refuses to see or care for his son due to Ronnie not being around. Matthew's grandfather, Nick Cotton takes Matthew from Roxy's flat in the middle of the night and attempts to force Charlie to spend time with his son, although Charlie refuses and takes him back to Roxy. Aleks suggests naming him Matthew after Charlie's grandmother Dot Branning's quotes from the Gospel of Matthew. Roxy then decides to hyphen Matthew's name so it's " Matthew Mitchell-Cotton" Aleks's daughter Ineta becomes fed up with her father looking after Matthew and takes him to the bus stop, so they can go to the hospital. Charlie finds them and takes Matthew home. Matthew is primarily cared for by his father Charlie and aunt Roxy until Ronnie is discharged from hospital when he is four months old.

When Matthew is nine months old, his parents separate and remains living with Ronnie, although Charlie vows to fight for custody of his son. When Charlie tells Roxy he wants to take Matthew to France with them, she soon tells Ronnie. Roxy runs away with Charlie, but he soon works out that Ronnie and Roxy are planning together when he notices Roxy looking at her phone continuously and Arthur Chubb informs him that Vincent Hubbard has told Ronnie, so he decides to leave with Matthew alone. However, Ronnie arrives before Charlie can board his train, and convinces him not to make the same mistakes as Nick did. Guilt ridden Charlie leaves on the train alone and leaving Matthew behind for Ronnie to find. Several days later, Charlie returns to Walford, having been persuaded by Dot to fight for his son, and refuses Ronnie access to Matthew threatening to reveal to the police that she murdered Carl White. She and her ex-boyfriend Vincent Hubbard confront Charlie, who then disappears, leaving Matthew in Ronnie's care again. Matthew lived with Ronnie and her former boyfriend, Jack Branning when she reunites with him in March 2016, and later Matthew's cousin Amy Mitchell who is Jack and Roxy's daughter is nearly hit by a car when Hannah Reynolds steps into the road whilst holding her, but is saved by Andy Flynn who pushes them out of the way of the approaching car.

Matthew was going to move to Essex with his mother Ronnie, Ronnie's fiancé Jack, his aunt Roxy, cousin Amy and Jack's son Ricky. On the night that Ronnie and Jack remarry, Ronnie and Roxy die, leaving Matthew solely in Jack's care alongside Amy and Ricky. Jack's stepmother Dot who is also Charlie's grandmother, tells Ronnie and Roxy's mother Glenda that Matthew should live with his biological father but Glenda insists that he is better off with Jack. Despite this, after Ronnie and Roxy's funerals, Glenda tells Jack she wants to raise Matthew but Jack insists Matthew will stay with him and Glenda threatens to go through the courts so Jack decides to let Glenda move in to help bring up the children but Charlie later decides to take Matthew and raise him by himself. Jack tries to stop him but Charlie tells him that Matthew hasn't got anything to do with him. After Matthew leaves to live in Ireland with his biological father Amy's behaviour changes but she soon becomes herself after a chat with Jack. 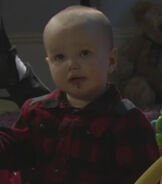 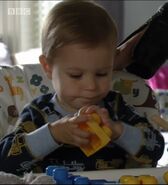 matthew as a baby

matthew
Add a photo to this gallery

Retrieved from "https://eastenders.fandom.com/wiki/Matthew_Mitchell-Cotton?oldid=207367"
Community content is available under CC-BY-SA unless otherwise noted.