Masood, along with his wife Zainab, and their children Shabnam and Tamwar, move the square in October 2007. It is revealed that Masood is a postman while Zainab was the owner of a chain of post offices. Masood goes to Pakistan to look after this sick father, and when he returns, he discovers that the rest of his family are in serious debt, and are forced to close the post office. However, they lie to the residents of the Square by telling them that the government forced them to shut down, but soon they are forced to reveal the truth when the residents start protesting. In an attempt to turn their fortunes round, the Masoods start a catering business. Ian Beale invests £2000 and the company merges with Ian and Christian Clarke's catering business, and the company is names "Masala Queen". However, Zainab soon accuses Masood of stealing money from the business, but Tamqar admits he has been taking the money and giving it to his brother, Syed Masood. Masood is angry at this since Syed had stolen money from their business before, which was why he left the family before. Despite this, Zainab vists her son, but Masood thinks she is having an affair. When the truth is revealed, Masood lets Syed move to the square, where he is engaged to Amira Shah. Masood plans to take Zainab on a trip arounf the world, but Zainab tells her husband that she is pregnant, stopping the plans. In order to earn extra income and money, Masood works an extra shift at the taxi firm, depite being exhausted. One time during his job he is driving Rachel Branning home to Tring, but he falls asleep at the wheel and crashes the taxi. PC Henderson questions Masood about the incident and Amira lies by saying he swerved to avoid someone on a moped. The police leave and Amira tells Masood she does not want two fathers in prison, but Masood still regrets lying to the police.

Before Syed and Amira's wedding, Masood visits his brother Inzamam to ask for help in paying for the wedding. However, Zainab reveals to Masood that Inzamam has made advances at her in the past many times. Because of this, Masood tells Inzamam's money is no longer needed and he and his family are no longer welcome at his gome. A month before the wedding, Masood is still unaware that there are problems in Syed and Amiras' relationship. During this time Zainab also goes into labour and Masood delivers the baby, who they name Kamil. But more problems arise as Masood's line managre David Hensler arrives with a colleague, saying there has been an allegation of stolen post, and they must search the house. During the search, they find a package of Max Branning's, and Masood receives a cuation.

Just before the wedding, Masood walks in on Syed and Christian kissing on the floor of Syed and Amiras' new flat and he quickly leaves. When Syed admits to his parents that his gay, Masood attempts to convince Syed that he has a loving wife, but Syed ignores this, and leaves his gome. Because of this, Masood believes that he is no longer part of the family, and doesn't even want to hear his name (but Zainab misses him dearly). Amira's father Qadim Shah arrives in Walford looking for Syed, and after Qadim and his associates beat Christian up, Christian sees Masood outside and begs for help, but Masood leaves him. The next day, Masood regrets his actions, saying he should've helped Christian. Jane reveals that Zainab knew about Syed's sexualality before even the wedding, which causes Masood and Zainab, and he packs her bags and physically throws her out. Masood and Zainab eventually reconile, and they both forgive Masood and allows him to move into the family home. However, Syed eventually reunites with Christian, and Masood and Zainab cut him off their son again.

Yusef and divorce from Zainab

Masood's son, Tamwar, starts seeing Afia Khan, and her father, Yusef, turns up at the square, which shocks Zainab as he was her ex-husband, whose family set her on fire. He reveals he tried to save Zainab from the fire, and that he came to make peace, but Masood attacks Yusef and throws him out. Masood discovers that Zainab is planning to buy the Argee Bhajee restaurant against his wishes. Masood meets with Jane and they console each other about their partners. Realising their feelings for each other, they meet at hotel and are about to have sex. However, they both change their minds and decide to remain friends. Meanwhile Zainab continues to defy Masood and proceeds with her bid for the restaurant, but she is unsuccessful, but only paying an inflated price for it. Feeling guilty, Masood supports her purchase.

Ian learns of Masood and Jane's encounter, and confronts him, punching Masood in the face. Tamwar invisted Adia to the opening of the Arfee Bhajee. There Masood and Zaianab approve of Afia dating each other, in the hope it will frizzle out, but when Tamwar proposes to Afira and Yusef gives them his blessing, the parents are displeased as they do not want Yusef in the family. After the roof of the Arjee Bhajee collapses, they are forced to shut it and the Masoods find themselves in debt. Desperate for money, Masood receives a loan Phil for Tamwar's wedding, but when Zainab finds out, she is furious. Masood then admits he is gambling money by playing poker for Phil in an effort to pay their debt. This angers Zainab as Masood had perviously swon that he would never gamble again, as Masood lost family money to gamlbing before. In an attempt to scare him off, Masoof kidnaps Yusef in an attempt to scare him off, but when Yusef returns to Zainab and the family, he lies and says that Masood beat him and covered him in petrol, when Masood did not. However, Zainab doesn't believe Masood and kicks him out, and tells him he is banned from Tamwar and Afias' wedding.

At the mehndi, Afia's aunt tells everyone that Yusef and Zainab are having an affair, having misunderstood and overheard conversation, and Zainab deines this. Zainab invites Masood to dinner, and there is a chance that the two might reunite, until Denise reveals that Yusef stayed at Zainab's house overnight, making Masood leave. As part of his plan to destroy the Masood family, Yuesef crushes up a bottle of pills and hides them in Zainab's food. Zainab passes out when she eats the food and is taken to hospital, with her family believing she took and overdose on purpose. Concerned that he is causing Zainab's worries, Masood divorces Zainab by saying the triple talaq.

Yusef persuades Zainab to go on holiday with him to Pakistan, and while they are away, Amira returns with her and Syed's daughter, Yasmin. Masood is delighted to learn that he is a grandfather, and vows to reunite and repair his family, especially when it is revealed that Yusef falsified a paternity test to show that Syed is not Yasmin's father. Despite this, Masood sees Zainab talking to Yusef, and Masood says that he has given up on her. Yusef later tells Masood that he has moven in with Zainab. Angry and upset, Masood goes to Jane (who has returned to divroce Ian) and tells her he doesn't want to stay just as friends, and kisses her, and the pair begin a relationship. On the day Masood and Zainab's divorse finalised, Syed and Amira spot Masood with Jane. Zainab hears of this, and while she wishes Masood luck, she tells him that she and Yusef are going to marry. Masood is shocked, but supports her decision. When Yusef tells Masood and Jane about them tking Kamil to Pakistan, Zainab and Jane argue. Later, Masood and Jane go to dinner at Ian and Mandy's house. At the dinner, Ian questions Masood's relationship and whether he is allowed to develop his relationship with Jane since she is not a Muslim. A drunken Jane announces that she will convert to Islam, but Masood tells Jane of the sacrifices she will make, and does not expect her to convert. Jane is relieved and decides not to convert.

A few weeks later, Masood finds a latter form Zainab asking for help, and discovers that Yusef has kidnapped Kamil. He plots with Zainab to stop Yusef taking her to Pakistan, and eventually tracks down Kamil. The police are called on Yusef, but Afia lets him escape to the B+B where Masood stays during a party. At the party Yusef reveals to Masood that it was indeed him that started the fire on Zainab, before setting the B+B on fire. The two try to escape, but only Masood makes it out alive. Masood and Zainab then reunite.

Masood returns on the 28th November 2017. He has returned to notify Carmel Kazemi that he will not be renewing her tenancy at 41 Albert Square, to allow his aunt and uncle Mariam and Arshad Ahmed to move in.

In January 2018, Masood secures a job at the laundrette, however Karen walks in, thinking she secured the job. Mr. Papadopolous tells them that he will give them both a trial - whoever does the best job, gets the job.

In February 2019 Masood gives his business to nieces Iqra Ahmed and Habiba Ahmed and leaves Walford. 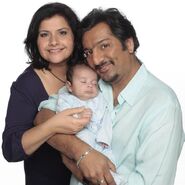 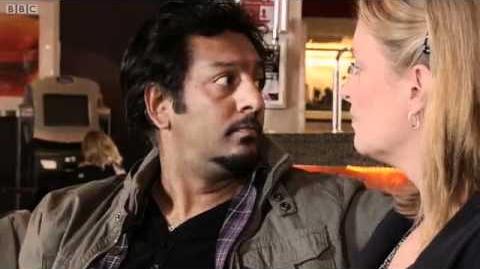 Masood Ahmed Instagram (24 April 2018)
Add a photo to this gallery
Retrieved from "https://eastenders.fandom.com/wiki/Masood_Ahmed?oldid=192207"
Community content is available under CC-BY-SA unless otherwise noted.