Mary is the granddaughter of Maggie Flaherty, Pauline Fowler's long-lost sister. Her father is Conor Flaherty, but she doesn't get on with him. When the go to Ireland to meet their relatives, Mary is a teenager in trouble. Although she has a level head on her shoulders, she is having an affair with an older married man, Gerry McCrae. Mary finds a good friend in her cousin Mark Fowler, and decides to move Walford, and their relationship improves over time.

Pauline initially likes Mary, often remarking that she is like a young version of her mother, but they cannot live in the same house and Mary often has to find new accommodation. Mary also comes between couple Joe Wicks and Sarah Hills, but Joe returns to Sarah after they have a one-night stand, breaking her heart.

Mary breaks her pelvis whilst on holiday in Norfolk and then gets involved with Matthew Rose and Robbie Jackson, before leaving Walford with her father, Conor, and his pregnant lover, Mark's wife Ruth Fowler. They now live in Scotland. 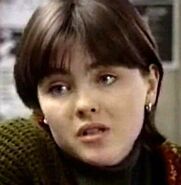 Mary Flaherty
Add a photo to this gallery
Retrieved from "https://eastenders.fandom.com/wiki/Mary_Flaherty?oldid=144658"
Community content is available under CC-BY-SA unless otherwise noted.