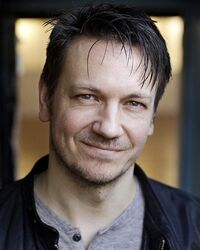 Mark Homer is a British actor of stage, television and film who played Tony Hills in EastEnders from 1995 to 1999.

In 1996, Mark's character and his on-screen partner Simon Raymond shared a gay kiss which was cut back on the advice of BBC1's boss - they were seen kissing on-screen at the end of Blackpool pier - but only for half a second. The rest of the scene ended up being cut.

After leaving EastEnders in 1999, Homer went on to appear in productions such as Casualty, The Dumping Ground and Stones. His last known contribution to television was in 2018 in a production called Alcatraz in which he played a character called Sam. However, he also has roles in upcoming productions which is Bundy and the Green River Killer, D-Day Assasins and Break.