Abi Branning
Marge was Abi's guinea pig, a replacement for Rolf after he died 23 February 2007. Bradley Branning thought Marge had been killed when a black bin bag was thrown into a workmans' fire, but Marge had actually been underneath it and later returned to the house by herself. But died later on. 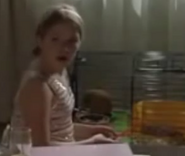 Add a photo to this gallery
Retrieved from "https://eastenders.fandom.com/wiki/Marge?oldid=179103"
Community content is available under CC-BY-SA unless otherwise noted.