Rebecca Miller (adoptive)
Margaret Wilson made her first appearance on 25 March 2005. She is portrayed by Janet Amsden.

Margaret is the adoptive grandmother of Sonia Jackson and Martin Fowler's daughter, Rebecca Miller, and mother of Rebecca's adoptive mother, Sue Miller. When Sue, along with her husband Neil Miller were killed in a car crash in 2005 Margaret became the parental guardian of Rebecca.

Margaret is first seen when Sonia visits her (under the name "Pamela") to see Rebecca. Margaret discovers that Sonia is Rebecca's biological mother, but after initially being hostile, she allows Sonia, along with Martin and Martin's mother Pauline Fowler to continue to visit Rebecca. On 15 December 2005, Margaret admits that she is getting tired so she lets Pauline, Martin and Sonia look after Rebecca for Christmas 2005.

On 1 May 2006, Margaret visits Sonia to tell her she wants her and Martin to be Rebecca's legal guardians. Just days later, she is disgusted with Sonia, as she discovers that Sonia has left Martin and lied about being together. Sonia later visits Margaret, who is almost convinced to allow Sonia back into Rebecca's life, until Sonia tells Margaret she is in a relationship with another woman, Naomi Julien. The next day, Martin visits Margaret and convinces her that Rebecca would be more secure with him and Pauline. 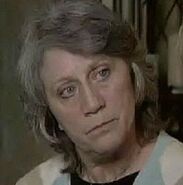 Retrieved from "https://eastenders.fandom.com/wiki/Margaret_Wilson?oldid=165226"
Community content is available under CC-BY-SA unless otherwise noted.