Mandy arrives in Albert Square in March 1992 when her hospitalised mother Lorraine, leaves her in Pat Butcher's care. She makes friends with Sam Mitchell but eventually leaves the Butchers as she feels unwanted by Pat's husband, Frank. She then begins squatting.

Mandy is a troublesome teenager. She blackmails Ian Beale, threatening to divulge that he visits prostitutes unless he employs her. Ian does not succumb, so Mandy survives by stealing, conning people and relying on charity. After Mandy is evicted from her squat, Kathy Beale allows her to live with her, but Mandy is eventually thrown out when she is caught spreading rumours that Kathy has been abusing her. Mandy ends up homeless and sleeping in a makeshift shanty. Mark Fowler and Steve Elliot eventually let Mandy stay with them, but Mandy's stirring contributes to the demise of Steve's relationship with Hattie Tavernier; Mandy and Hattie maintain an antagonistic relationship throughout their time together in Walford. On Christmas Eve 1992, Mandy receives a Christmas card from her mother, telling her she is visiting. However, Lorraine never arrives, so on Christmas Day, Mandy returns to Lorraine's flat but finds her mother's boyfriend, Gary, instead. He is abusive to Mandy and starts beating her, until she is rescued by Mark.

Mandy meets trainee footballer, Aidan Brosnan, in 1993. They begin dating, but Mandy is a bad influence on Aidan and encourages him to skip football practice, get drunk and use ecstasy. This results in an intoxicated Aidan falling and damaging his knee, and following a subsequent injury, Aidan is told that his career in professional football is over. The loss of his dream hits Aidan badly, but by now Mandy has fallen for him in a big way, and when he returns to Ireland, she follows him. Both soon return, having had a poor reception from Aidan's family. The young lovers are unable to find work so they begin sleeping on the streets and squatting. To get money, Mandy and Aidan beg and occasionally do odd jobs. It is on one such occasion that Grant Mitchell leaves his wife Sharon’s pet poodle, Roly, in Mandy's care. However, Mandy loses control of Roly and he dies after running straight into an oncoming truck, devastating Sharon. Mandy later cleans Dr Legg's GP surgery, but after stealing prescription slips and selling them to drug dealers, she is sacked. She then turns to 'clipping', acting as a prostitute then running off with the customer's money without performing the sexual service. However, the other prostitutes in Kings Cross beat Mandy and after she is arrested, Aidan makes her promise to stop.

When Richard Cole starts a smear campaign against them, accusing them of being behind a series of robberies around the Square, everyone turns on them. Aidan becomes depressed and on Christmas Day 1993, he attempts to commit suicide by threatening to jump off the top of a tower block. Mandy manages to stop him but Aidan realises that Mandy is bad for him, and he returns to his family in Ireland.

Mandy is distraught at losing Aidan. Pauline Fowler takes sympathy and allows her to stay with her; Mandy sees New Year 1994 in, huddled and sobbing on the Fowlers' couch. Early in 1994, Mandy turns to Ricky Butcher for comfort and they have a one-night stand. However, this only makes Mandy realise how much she misses Aidan, and she rejects Ricky's further advances. All alone, Mandy leaves Albert Square in January 1994, repaying the Fowlers' kindness by stealing Pauline's purse and hitching a ride with a lorry driver, who is heading west on the M11.

Mandy is not seen again for 17 years until Ian stumbles across her being thrown out of a strip club by a man Mandy claims is her abusive ex-boyfriend; however, it transpires the man is her employer at the strip club from whom Mandy has stolen £5,000. Ian allows her to stay with him in Walford and a friendship develops as Mandy bonds with Ian's son Bobby and helps Ian discover his frivolous side. Ian develops romantic feelings for Mandy and she accepts his impromptu marriage proposal. However, when Mandy meets her old friend Ricky, they reminisce, take drugs and have sex. This causes Mandy to rethink marriage to Ian; she decides not to attend the wedding ceremony but Ian pleads with her to change her mind and the wedding is rearranged.

In January 2012, Ian discovers Ricky and Mandy's tryst; the revelation ends Ricky's marriage to Bianca Butcher. Mandy confesses to Ian that she became pregnant with Ricky's child in January 1994 and gave birth to a premature daughter, Kira, who died. She suggests she had sex with Ricky because of unresolved feelings for her dead daughter. Ian forgives Mandy but further problems arise when Ian's daughter Lucy returns to Walford and takes a dislike to Mandy. Lucy attempts to turn Ian against Mandy by setting her up, poisoning Bobby's mind against her and sabotaging Mandy's wedding plans. When Lucy discovers Mandy texting someone called "L Stevens", she suspects Mandy is having an affair and arranges for "L" to visit, not realising "L" stands for Lorraine, Mandy's estranged, alcoholic mother. Seeing an opportunity to make use of Ian's resources, Lorraine convinces him that she wants to bond with Mandy, but when he is absent she verbally and physically abuses Mandy. Lorraine's true nature is eventually revealed and Ian sends her away, but her stirring nearly causes Mandy and Ian's relationship to end. When a sickly Lorraine returns to Walford, Ian forbids Mandy from caring for her. Secretly, Mandy visits Lorraine in hospital and they briefly bond, but Lorraine turns nasty again when Mandy disobeys her, telling her that she has never loved or wanted her. A few weeks later, Mandy is devastated to learn that Lorraine has died. Ian, who is going through financial difficulties and is behaving erratically, refuses to let Mandy grieve and goes ahead with his plans to bring their wedding forward. On their wedding day, Mandy is perturbed by Ian's increasingly strange behaviour and refuses to marry him, revealing that she has been forcing herself to love him. Ian begs her to stay but Mandy leaves as a devastated Ian shouts her name. Ian suffers a breakdown and absconds shortly after without telling his family where he is going. When Lucy discovers Ian's credit card being used in a Rochester hotel a week later, she and Phil Mitchell go in search of him. They find Mandy, who has been using Ian's credit card to pay for her mother's funeral. Mandy denies knowing where Ian is. She vows to make a success of her life, stating it is "time to grow up".

An old picture of Mandy 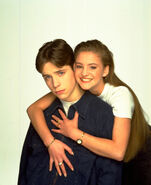 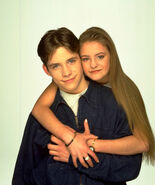 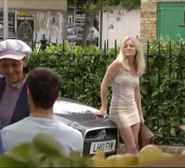 Mandy steps foot in Albert Square again after 18 years away.

Mandy Salter - Name Card
Add a photo to this gallery
Retrieved from "https://eastenders.fandom.com/wiki/Mandy_Salter?oldid=203957"
Community content is available under CC-BY-SA unless otherwise noted.