Louie Beale
Liam Butcher
Morgan Butcher
Tiffany Butcher
Maggie Flaherty (née Medeemey) is the eldest daughter of Albert and Lou Beale, born out of wedlock and adopted at birth. Her existence only became known to her younger siblings in 1997 and they visited her in Ireland.

Born in 1933 to Albert Beale and his girlfriend Lou, she was adopted out to an Irish family, shortly after birth. Lou went on to marry Albert in 1935 and have seven more children but kept the existence of her first child a secret for the rest of her life.

Pauline Fowler tracked Maggie down in 1997 and visited her and her family in Ireland. Maggie said how she was adopted to a family as her mum Lou had her while unmarried. Maggie had found her birth certificate which showed that Albert Beale was indeed her father and she was a full sister to Pauline, meaning Lou was seeing Albert for a few years before they actually married. Pauline said to Maggie that she saw her dad in her. While staying with the Flaherty's Maggie's lecherous husband Sean Flaherty flirted with Pauline and was abusive towards their granddaughter Mary Flaherty. When Pauline and her family leave, taking Mary with them, she begs Maggie to leave Sean and return to Walford with her, but Maggie decides to stay and look after her vast family. This is the last time she is seen.

In April 2014, 81 year old Maggie sent flowers to her nephew Ian Beale upon the death of his daughter Lucy Beale.

Maggie died in April 2019, at the age of 86. Her funeral was held in Ireland and was attended by her nephew Martin Fowler. 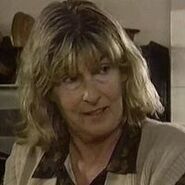 Retrieved from "https://eastenders.fandom.com/wiki/Maggie_Flaherty?oldid=198242"
Community content is available under CC-BY-SA unless otherwise noted.