Murdered by Phil Mitchell’s hitmen after assaulting his son Ben

Director of Development at Weyland & Co

Luke is the son of James Willmott-Brown, and brother of Sophie and half-brother of Josh.

In May 2017, Max Branning receives a visiting order from Luke's uncle, Hugo Browning, and goes to visit Luke. It is revealed that Luke and Max are former cellmates who met when Max was wrongfully imprisoned for the murder of Lucy Beale.

In September 2017, Luke is released and Max picks him up. They travel to the home of their boss and Luke's father, James Willmott-Brown. Luke becomes close to Ben Mitchell and, after sleeping together in Mitchell's Autos, they become boyfriends.

In November 2017, Ben finds a business card in Luke's wallet with the words "Project Dagmar" inked in. Ben knows that Dagmar is the bar in which Luke's dad, James, raped Ben's mother Kathy Beale in. After questioning him, Luke throws him up against a car and throttles him.

A few days later, Jay Brown lets slip to Lauren Branning that Luke throttled Ben. Lauren, who works at Weyland&Co (the company which James Wilmott-Brown owns) asks her boss Josh Hemmings (Luke's half-brother, however she doesn't know this) what Project Dagmar is. He says he doesn't know. Upon asking Luke, he is also throttled by him, and would have killed him if Sophie hadn't intervened.

In December 2017, Luke gifts Ben a car. Ben asks him to take it back, and Luke pays a visit. After Ben insulted Luke, Luke pushed him over, prompting Ben to declare he is not scared of him and he begins to whack a wrench about. When he puts it down, however, Luke beats him unconscious.

Later that day, he stands by James, Sophie and Max Branning as they serve the Carter family an eviction notice for the Queen Victoria pub.

After this, Max proposes to Sophie. He only holds the box out, and James (Sophie's father), tells him to get down on one knee and ask properly. He asks properly, but doesn't get on a knee. She starts shaking her head and stutters Max's name. James starts laughing, and Max asks him what is going on. James tells him he has been useful, but all good things come to an end. He shows him a cheque for 350,000 pounds payable to Max, and throws it in the fireplace. The Willmott-Brown family are thrown out of the pub by the Carters.

Later in the episode, Ben is revealed to be alive and is vowing to kill Luke in his hospital bed.

During the fallout, Luke asks Ingrid Solberg if she knows Max Branning, and she takes him to the Branning residence. Luke dumps the contents of Max's desk at Weyland&Co on his doorstep, and Max grabs him by the collar, but Jack stops him and throws Luke out. Later in the episode, whilst Kathy is talking to Tina Carter in Kathy's Cafe, Luke walks in. She tells him to get out, and he calls the remark "not very friendly". She retorts with "not very friendly assaulting my son", and he tells her to be careful throwing accusations like that about. Kathy tells him she won't serve him, then Luke tells her that they own the place, to Kathy and Tina's horror.

During the fallout of the Willmott-Brown reveal, Luke asks if he can talk to Lauren in private. He asks her if she can serve the eviction notice to Kathy, and says he will fire her if she does not. She appears to accept, but she returns and throws the papers in his face. Luke gives Josh a contract termination letter to give to Lauren. Later in the episode, Luke is bundled into a van by two masked men as Phil Mitchell looks on. Aiden later confirms that he has killed Luke.

DI Stephan Franklin confirms to Vincent Hubbard that Luke's body turned up in a canal. 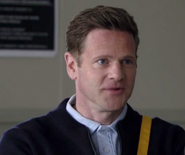 Retrieved from "https://eastenders.fandom.com/wiki/Luke_Browning?oldid=198333"
Community content is available under CC-BY-SA unless otherwise noted.