Louie Beale
Natasha Butcher
Liam Butcher
Tiffany Butcher
Morgan Butcher
Whitney Dean (adoptive)
Abi Branning (adoptive)
Louise "Lou" Ada Beale (née Medeemey) was the battleaxe matriarch of the Beale and Fowler family. She was the mother of ten children, including twins Pauline and Pete, and was married to Albert. Her great-granddaughter Lulu Fowler (deceased) is named after her.

Born Louise Ada Medeemey in the East End on the 4th August 1910, the youngest of 7 children born to Mr and Mrs Medeemey. Lou lived in Walford all her life. She grew up in Brady Street in Walford. In 1932, aged 22, she met local fruit and veg trader Albert Beale and he got her pregnant. They had a daughter, Maggie in March 1933 and had her adopted as Albert and Lou were not married. A family called O'Carroll adopted Maggie and Maggie took their name.

Albert Beale and Lou came to their house on the corner of Albert Square, number forty-five, on finally getting married in September 1935. Lou remained in the house throughout the Second World War and brought up her children there. Her affinity and ties with the area meant that she tended to view Albert Square as her own and that gave her an excuse to intrude into people's business as she saw fit.

After Albert died of a heart attack in 1965, Lou remained in the house on Albert Square with her daughter's family; son-in-law Arthur and grandchildren, Michelle and Mark. Kenny emigrated to New Zealand in the 1960s and it was left to Pauline and Pete to tend to their mum's welfare in her old-age. Lou was as tough as nails and gained a reputation as a fierce East End lady that you did not want to cross. However she did have her warm, caring side.

Lou was great friends with Dot Cotton and Ethel Skinner, her lifelong neighbours. She also had a good relationship with the local general practitioner, Dr Legg and the old Jewish pawnbroker known only as 'Uncle'.

She had a tempestuous relationship with son-in-law Arthur; nothing he did was ever good enough for her daughter Pauline. In February 1985, she was furious to discover that Pauline had fallen pregnant for the third time, her family already financially crippled by Arthur's long stint of unemployment. Lou wasn't adverse to speaking her mind or scolding her family if she disapproved of their actions, but she soon came to celebrate her grandson Martin's birth - although she would have preferred him to be named Albert after her late husband. She was a strict conservative who fully believed in traditions and morals, but she believed in strong family-values most of all, and would defend her family to the hilt if any outsider dared to criticise them, particularly if the outsider was wrong. She provided a warm shoulder to cry on when Michelle found out she was pregnant in late 1985 and was supportive of her favourite grandchild, Ian, on his plans to work within the catering trade rather than following in his father's footsteps in a more masculine occupation.

Lou had a long standing feud with son Pete's ex-wife Pat, having never forgiven her for having an affair with his older brother, Kenny. Lou was plagued with mixed feelings when Kenny returned to London in 1988, after banishing him from their lives twenty years before. She had always had a difficult relationship with her son, feeling him to be "too big for the Square" and feared that Pat's revelation, that he was the true father of Pete's son Simon, would tear her beloved family apart. Before his return to New Zealand, Lou managed to make amends with her estranged son, despite Pat's malicious stirring - who later admitted to Simon that Brian Wicks was his real father after all.

In her later years, Lou was frequently ill. In 1985, Lou collapsed outside the train station and had to be helped home. Things reached a sudden climax, when in July 1988, Lou returned from a holiday in her beloved Leigh-on-sea, feeling distinctly unwell. Sensing and fearing that she would soon die, she took the opportunity to announce to her nearest and dearest exactly what she thought of them; even managing to make a truce of sorts with nemesis Pat. After gathering her clan of Beales and Fowlers around her, she had a few choice words of wisdom and encouragement for each family member. She also handed over to her daughter Pauline the role of the leader of the Beale family. Then she went to bed, having finally sorted out her family. The next morning, her daughter Pauline went into her bedroom, to give her her breakfast in bed and discovered that Lou had died peacefully and painlessly while she was sleeping in her bed. Pauline, Pete, Michelle and Ian were devastated that Lou was dead. Her friends and family mourned her death affectionately, never quite managing to forget the irreplaceable "old bag".

One of six siblings, Lou was from a large East End family herself. Only her older sister Flo came to outlive her. In 1990, Harry Osborne returned to Albert Square – he had been engaged to Lou's older sister, Doris, but she married Morris Miller after he was presumed dead in the war. In 1993, Lou's relative Nellie came to stay with Pauline and Arthur. In 1997, it was discovered that Lou had given birth to another daughter, also fathered by Albert, who Lou had given up for adoption because she was conceived out of wedlock. Pauline, Ian and Mark travelled to Ireland later that year to reunite with their long-lost family member, Maggie Flaherty.

Lou with Michelle and Pauline. 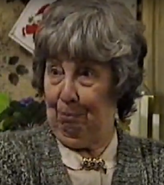 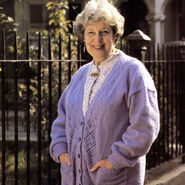