Lorraine first arrived in Albert Square in April 1996 when she came in search of her son, Joe Wicks, who had run away from their home in Bolton with the hope of reuniting with his estranged father, David Wicks. Lorraine's marriage to David Wicks had been a disaster, ruined by David's numerous infidelities. He had abandoned his wife and two children (Karen Wicks and Joe) almost eight years prior to Joe's re-appearance, and he had subsequently played no part in any of their lives. David wasn't exactly thrilled to see his son, whose overt display of emotion left him feeling decidedly uncomfortable. Lorraine was even less happy to be reunited with her ex-husband. She and Joe had been through a turbulent time since his departure. Her daughter Karen had been killed in a car accident and Joe blamed himself for her death because he had swapped seats with her moments before the fatal crash. Upon hearing of Karen's death, David became wracked with guilt about abandoning his children, but it still didn't evoke any parental feelings in him towards his son, and he was relieved when Lorraine managed to persuade Joe to return to Bolton. Joe, however, was not easily put off, and he returned to Walford in May that year, determined to rebuild a relationship with his father; in order to keep him happy Lorraine moved there with him.

Lorraine got a job as a barmaid in the Queen Vic and it wasn't long before she'd caught the eye of both Grant Mitchell and his friend [[[Nigel Bates]]. Nigel pursued Lorraine, but although she liked him, she was never interested in anything more than friendship. Grant was different, and the two started a relationship, which resulted in him throwing his wife Tiffany Mitchell out (who was six months pregnant with his child at the time).

Grant was infatuated with Lorraine and even proposed to her, but Lorraine was forced to put their relationship on the back-burner after her son Joe had a mental breakdown. Joe's behaviour towards his mother became extremely hostile and he also started to develop severe paranoia; even thinking that Grant was the devil and was attempting to poison him. Grant, never the diplomat, decided to counter Joe's accusation by literally trying to shake some sense into him. However, his outburst was witnessed by Lorraine, who promptly finished their relationship.

Joe's mental status only worsened after his father ran out on him for a second time. Lorraine became desperate, but her attempts at getting Joe professional help did nothing to help matters. Joe eventually became so fearful of the outside world that he refused to leave his flat and this culminated in him holding Lorraine hostage one night, dowsing himself in petrol and threatening to kill himself or anyone that came near him. Grant managed to rescue Lorraine, but Joe was sectioned as a result and later diagnosed as suffering from schizophrenia.

Joe was later released, and with his condition stabilised he began to live a normal life. He made a trip to Bolton and was instrumental in reuniting Lorraine with her ex-boyfriend Peter. Peter had been driving the car at the time of the crash that killed Lorraine's daughter and this had led to their eventual breakup. Upon reconciling with Peter Lorraine decided to go back to Bolton. Her last appearance was in 1997.

Leonard says that viewers of the soap warmed to the character as she was depicted as a "caring mum". She claims she received a lot of fan mail from fans, mostly children, who wanted their mum to be like Lorraine. 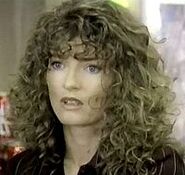 Lorraine Wicks
Add a photo to this gallery
Retrieved from "https://eastenders.fandom.com/wiki/Lorraine_Wicks?oldid=181786"
Community content is available under CC-BY-SA unless otherwise noted.