Kira Salter
Lorraine Stevens (also Salter) is the mother of Mandy Salter and grandmother of Kira.

Pat goes to a bar, intending to pick up another man for sex, and meets Lorraine. Pat helps Lorraine when a man starts to harass her, claiming to have spent money on her the night before and implying Lorraine is a prostitute. Shortly after, Lorraine turns up at the Butchers' house, requesting a place to stay. She outstays her welcome and when she is asked to leave, she threatens to tell Frank that Pat has been cruising for other men in bars, causing some difficulty in the Butchers' marriage. Seeing Lorraine's existence makes Pat realise that she has left her promiscuous lifestyle behind her.

The following year, in March 1992, Lorraine contacts Pat from hospital. She has been severely beaten by her boyfriend Gary and needs Pat to take care of her 15-year-old daughter Mandy. Having had her daughter taken into care by the social services in the past, Lorraine wants to prevent this from happening again. Pat is initially unwilling to help, but she eventually relents and Mandy stays at the Butchers'. Lorraine is released from hospital the following week, and she abandons her daughter. Mandy ends up homeless and sleeping on the streets. On Christmas Eve 1992, Lorraine contacts Mandy and tells her she is coming to visit. She does not arrive, so Mandy travels to her flat on Christmas Day to reunite. Lorraine is not there and Mandy is instead greeted by Gary. After getting into a fight with Gary, Mandy flees from her mother's tower block with Mark Fowler.

Returning after 20 years of absence, Lorraine appears in The Queen Victoria public house after Lucy Beale contacts her to come to Walford, assuming she is a man that Mandy is having an affair with. Mandy does not want her around, but she bonds with Mandy's partner Ian Beale, who invites her to stay with them. When they are alone, Lorraine is verbally and physically abusive to Mandy. Lucy is shocked to overhear Lorraine telling Mandy that nobody cares about her and men do not fall in love with girls like her. During a meal at a restaurant, where Lorraine convinces Ian to order champagne, Lucy reveals that Lorraine has stolen Ian's money and that she is an alcoholic. In retaliation, Lorraine accuses Mandy of using Ian for money and making him work for sex, upon which Ian banishes Lorraine on 9 March 2012.

Off-screen, Lorraine causes problems for Mandy by informing Mandy's ex-boyfriend, Alex Foster, where she lives, causing Ian to become insecure. Lorraine reappears on 30 April 2012, nearly two months later, claiming that her years of alcohol abuse has left her very ill, and that she is dying. Although Mandy does not believe her initially, she eventually agrees to look after her. Ian forbids this, so Mandy leaves Lorraine outside the tube station, telling her she cannot disobey Ian's wishes. Lorraine, who is doubled over in pain, collapses. Mandy later visits Lorraine in hospital, where they start to bond. However, Lorraine soon turns nasty again and tells Mandy she never loved her. Several weeks later, just before her wedding, Mandy goes to visit Lorraine in hospital but is devastated to learn that she has died. Lorraine's death is not screened. Nobody except Mandy attends Lorraine's funeral, mirroring what Lorraine said to Mandy that nobody would care if she died. 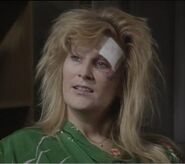 Retrieved from "https://eastenders.fandom.com/wiki/Lorraine_Salter?oldid=157005"
Community content is available under CC-BY-SA unless otherwise noted.