Leaves after her mother exposes her sexual relationship with Jay

Rodney Bragg
Linzi "Star" Bragg made her first appearance on 8 February 2016. She is portrayed by Amy-Leigh Hickman. Linzi is a friend of Bex Fowler and former girlfriend of Jay Brown.

Linzi is also the daughter of Thelma Bragg and the sister of Rodney Bragg and two other brothers.

Jay Brown bumps into Linzi outside The Queen Victoria pub, and then follows her into the café. She tells him she is waiting to take someone home, and he buys her a milkshake. They exchange numbers before Linzi leaves with her mother, Thelma Bragg. A few days later, Jay and Linzi meet for a date, but Jay is unable to get them a table at a restaurant, so he decorates the garage where he works and they have a date there. They share a kiss but when she leaves abruptly, he assumes she does not want a second date. He is frustrated when she does not reply to his text messages. However, she later visits him at home where they are found kissing by Ben Mitchell and girlfriend Abi Branning. Linzi suggests they all go on holiday to Ibiza in the summer. Linzi and Jay go to the car lot to be alone and Jay leaves Linzi alone whilst he goes out to get condoms. A drunken Phil Mitchell destroys the car lot with a digger and Jay fears Linzi is trapped, but is relieved to discover she was not inside when it happened. Jay tells Linzi that Louise Mitchell tried to kiss him so Linzi warns Louise to stay away from Jay.

Jay and Linzi plan a night in a hotel, and Linzi sends Jay a sexually explicit video and photos. When Jay collects Louise from school after she is in a fight, he is shocked that Louise was fighting with Linzi and she is a schoolgirl. Louise and Bex Fowler tell Jay that Linzi's real name is Star and she is 14. Jay later meets Star, and she begs him not to end their relationship, as he is the only person who has ever treated her well; even her mother was too drunk when she was born to give her a proper name and she was named by the punters at her pub. He tells her to forget everything that has happened and she says she understands but is upset. However, when Louise catches them talking, she insults Star and Jay tells her to leave him alone. Star seeks comfort from Bex, who tells Thelma about the relationship, and Thelma goes to The Queen Victoria demanding to know who has had sex with her underage daughter, and Bex says it was Jay. Star leaves in tears and later runs away from Thelma. Jay is arrested when Thelma calls the police.

Jay is interviewed by the police and the photos and video that Star sent him are found on his phone, though he had deleted them when he discovered her age. He pleads guilty, knowing that he has no defence against the photos being there and because he does not want to put Star through the ordeal of giving evidence in court and the photos being shown. Due to mitigating factors, Jay is given a non-custodial sentence of 150 hours of unpaid work and must sign the Sex Offender Register for five years. Star's brothers brutally attack Jay and he is shunned by some of his family and the wider community because he pleaded guilty; he is branded a paedophile. Louise angrily confronts Star over causing Jay's ordeal. Sonia Fowler takes Star to her house and looks after her whilst Jay's court appearance takes place.

Sonia reassures Star, who feels guilty over Jay's situation. Thelma comes to collect her afterwards and takes her home. Following an incident when an explicit photo of Shakil Kazemi goes around school, results in Bex being bullied by Madison Drake and Alexandra D'Costa, Star offers support to Bex. Bex and Star go to Ben's 21st birthday party but Jay insists she leaves. Star tells Jay that she still has feelings for him and went to the party so she could see him again, and tells Jay that Madison, who Jay has been talking to at the party, is 15 and he therefore knew what he was doing with Star and is now doing it again. 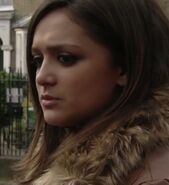 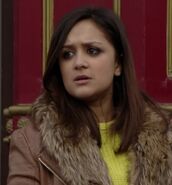 Retrieved from "https://eastenders.fandom.com/wiki/Linzi_Bragg?oldid=206534"
Community content is available under CC-BY-SA unless otherwise noted.