Jack Temple (1959–83)
Lilly Mattock made her first appearance 5 November 1998. She is portrayed by Barbara Keogh.

Lilly was a former hoofer with the Westwood Girls (a showgirl), performing throughout Europe and the Far East at the close of World War II. She was married to Jack Temple, manager of the Westwood Girls, until he died in 1983. She arrives in Albert Square in 1998 when she moves into a flat with fellow senior-citizen Dot Cotton when both of their respective homes burn down.

Lilly's fun-loving, cheeky personality is in stark contrast to Dot's and the two often wind each other up with their obvious personality differences. She once even tries to persuade Dot that Jeff Healy has amorous intentions towards her, which has Dot in a bit of a fluster. She is also the first known person in the Square, before Jeff himself, to refer to her consistently as "Dorothy".

Lilly is never one to let her age spoil her fun and she often gives the youngsters of Walford a run for their money by clubbing in e20, trouncing Huw Edwards and Lenny Wallace at a game of poker and making an exhibition of herself in salsa classes. Her penchant for late-night clubbing even prompts owner Steve Owen to bar her from his club, for fear that she will upstage his younger clientele.

Lilly works for Terry and Irene Raymond at the First Til Last grocery store. She also befriends Gareth Wiley a local youth who is staying in a nearby dosshouse. He is in debt but does not tell Lily. She offers him some work fixing their oven and getting prepared for a party. Gareth wants paying for his efforts. Lily and Dot give him a bag of fruit, beer, cake and sandwiches. Wiley panics as he knows this is all they will give him. Dot offers him £10 but Wiley throws the goodie bag down on the floor and is asked to leave. At the party that night, Lily goes to the First Ti Last to buy some more beer but is met by Wiley. He demands her handbag. She puts up a fight and he throws her down and runs off into the night. Wiley is later arrested.

After this ordeal, Lilly becomes a recluse, not wanting to go out for fear of being attacked again. Suddenly faced with her own fragility, Lilly is forced to deal with the realisation that she isn't as strong or independent as she thought. It takes many months for Lilly to face the outside world and her personality is changed forever as a result.

Lilly and Dot's differences soon begin to take their toll and in 1999 Lilly makes the decision to leave Walford and move into sheltered accommodation when the insurance cheque for her flat comes through, leaving Dot to move in with Pauline Fowler. 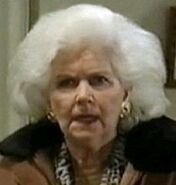 Retrieved from "https://eastenders.fandom.com/wiki/Lilly_Mattock?oldid=143035"
Community content is available under CC-BY-SA unless otherwise noted.