Liang Chong
Li Chong made her first appearance on 16 November 2006. She is portrayed by Elaine Tan, who had previously acted the role of a receptionist in the episode dated 22 January 2004.

Li is first seen in Walford Video, where she sells Cantonese DVDs to Mickey Miller. She continues doing business with Mickey, and attracts the attention of Mickey's teenage brother Darren Miller, who tells her that Mickey wants to cook dinner for her, when in fact Darren wants to seduce her. Li ties Darren to his bed, writing "Loser" on his head in lipstick. After that she gets together with Mickey, who seems scared of her "sex madness". She is later seen at Tanya Branning's birthday party, and exposes a rival to Mickey's affections, Preeti Choraria, who has enhanced her breasts with padding. Li later borrows £200 from Darren and provides stock for Preeti's Ann Summers-style party. Li fails to sell any stock, and the party ends with her fighting with Chelsea Fox.

Li's relationship with Mickey progresses and they both eventually move into Gus Smith's flat. It is revealed there that Li is growing cannabis, much to Mickey's fury but she tells him that she wouldn't have to do it if he had good work. When Mickey fails to get the job of a post boy at Bradley Branning's office, Li advertises him as an escort without him knowing, but Gus finds out and informs Mickey. Mickey then warns Li to cancel the ad. Li leaves when Mickey admits that he wants more from their relationship. In shock, Li packs her bags and leaves Walford. She has never been seen or mentioned again. 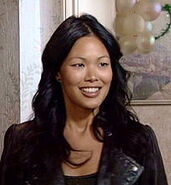 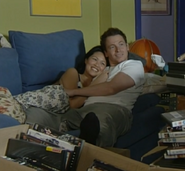 Li Chong and Mickey Miller
Add a photo to this gallery
Retrieved from "https://eastenders.fandom.com/wiki/Li_Chong?oldid=188459"
Community content is available under CC-BY-SA unless otherwise noted.