Conceived due to a teenage one night stand between Lola Pearce and Ben Mitchell. Aided by Cora Cross, Jay Mitchell, Ben, Patrick Trueman and Fatboy, Lola gives birth to her daughter, with Billy making it just in time to witness the birth of his great-granddaughter Lola brings the baby home and names her Lexi, after a girl she knew (which later transpired to be Alexa Smith, with the middle name Billie, in honour of her grandfather. Lexi then wins a local "beautiful baby" competition. Lola soon gets a new social worker, Trish Barnes, who visits regularly, one time seeing paint on Lexi's feet and becoming concerned that Lexi could have an allergic reaction, and later worrying when Lexi develops a cough, so Trish decides to visit daily. When Lola is arrested for assault, Trish takes Lexi into her care.

In a desperate plea to save Lexi, Lola then finally decides to tell Phil Mitchell that Lexi's father is his son Ben and that Lexi is his Granddaughter following their one-night stand a year previously. Phil agrees to help get Lexi back, on the condition that Lexi lives with him. Lola eventually agrees and Lexi starts visiting her from time to time.

Lola is angered when Phil decides to tell Ben he is a father. Phil later wins custody of Lexi and is allowed to be her foster carer and Lola is only allowed to visit her three times a week, leaving her devastated. Phil organises for Lexi to be christened on 1 January 2013, but Lola is angry to discover that he plans on naming her 'Mitchell' instead of 'Pearce', however after a talk with Phil, Lola later agrees that they are all part of the Mitchell Family and agrees to change Lexi's last name to Mitchell, making her Lexi Mitchell and is baptised as such with Jay Brown as her godfather and Cora Cross as her godmother.

Phil becomes controlling of Lola's relationship with Lexi and is determined to not let Lola be reunited with her daughter. At a court hearing to determine Lexi's future, his solicitor tells the court that Lola is an unfit mother, so her access is unchanged. Lols overhears Phil saying she will never get custody of Lexi, so she snatches Lexi from Phil's house. They are eventually found, and the next day when Trish visits, Phil says he intends to help reunite Lexi with Lola and Lola is then given increased access to Lexi.

Phil later takes Lola and Lexi to prison to see Ben, so Lexi can meet her father, although Ben tells Lola to keep Lexi away from Phil. Lexi is later taken to the hospital after Lola suspects to have meningitis, although she is relieved to discover that Lexi is fine. At the final court hearing, Phil says that Lola deserves her daughter and Lexi is returned with Lola, much to Lola's delight. Lola then starts a relationship with Peter Beale and he moves in with Lola, Lexi and Billy. Although after they split up, Lola moves to newcastle with Lexi and Peter gets back together with his previous girlfriend Lauren Branning and Lauren gives birth to Peter's son who is named Louie. Lola and Peter went their separate ways but Ben still took no interest in his daughter.

In 2017, Ben's sister Louise Mitchell is rushed to hospital, following her getting burnt in a fire at her school prom! as a result of revenge. Louise's mother Lisa Fowler shows up at the hospital and she and Ben get into an argument. Lisa tells Ben that he doesn't understand how she feels because he has no children and Ben replies back to Lisa telling her that he has a daughter, Lexi and he can’t see her.

In April 2019, Lexi returned to Walford with Lola and Ben. 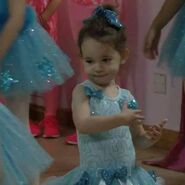 Retrieved from "https://eastenders.fandom.com/wiki/Lexi_Pearce?oldid=190028"
Community content is available under CC-BY-SA unless otherwise noted.