Lenny Wallace made his first appearance 28 May 1996. He is portrayed by Desune Coleman.Lenny was a fun loving individual, who didn't take life too seriously. He had a penchant for loud music and an eye for the ladies.

Lenny is first seen in Walford in May 1996. Lenny, along with his Welsh friend, Huw Edwards, are employed by George Palmer as barmen for the Cobra Club.

Lenny and Huw soon move to Albert Square and begin renting 55 Victoria Road from Mark and Ruth Fowler. The house is situated next to Ian Beale's and they manage to make an enemy of him by continually playing their music extremely loudly in the evening, and they also operate a pirate radio station from the premises for a while. As well as his bar work, Lenny is also hired as a cab driver by Barry Evans in 1997. Lenny spends most of his time drinking, playing poker and throwing parties. Lenny is also a womaniser, and he takes an immediate shine to Bianca Jackson. He constantly pursues her and even though she is dating Ricky Butcher at the time, they have a one-night stand, which results in a pregnancy scare. Lenny is mortified at the idea of being a father, but it turns out to be a false alarm. Bianca opts not to tell Ricky about her infidelity, and marries him instead.

After the Cobra Club closes following a police raid, Lenny loses his job and both he and Huw are unable to pay their rent on time. Mark and Ruth decide to ask them to vacate the property, but they refuse and claim squatters' rights instead. Although it is initially Huw's idea to claim squatters' rights, when Barry Evans offers him a room at his flat, he jumps at the chance and leaves Lenny alone. Lenny is furious, but as it is now just him in the house, Mark and Ruth decide to let him stay on as a lodger and they move back in. He stays with them for several months until he patches up his differences with Huw and they both then decide to squat in one of the flats at 47 Albert Square. Lenny has a keen interest in speedway motorbike racing, and takes Ricky Butcher along with him on one occasion. Ricky turns out to be quite a skilled racer and Lenny is soon persuading him to take up speedway racing professionally so he can be his manager. He is sacked shortly after when Ricky's wife Bianca decides to take over the job in his place. Lenny returns to work as a barman in 1998, firstly for Annie Palmer at the Market Cellar until she fires him, and then for Steve Owen at the e20.

In 1998 Lenny's womanising catches up with him when his ex-girlfriend, Alice, arrives in Walford with the news that she has tested positive for the sexually transmitted disease, Hepatitis B. She fears that he may also be carrying the disease and instructs him to get tested. Robbie Jackson overhears their conversation, and immediately informs his sister, Bianca. Bianca is mortified, thinking that her prior tryst with Lenny has put her at risk. This leads to Bianca admitting to Ricky that she had sex with Lenny years earlier, and this puts their relationship under severe strain. With everyone on the Square turning against him, Lenny feels isolated and depressed. However Huw is supportive and to Lenny's relief, his test results for Hepatitis B are negative. Later in the year Lenny busies himself with the promotion of Mick McFarlane's band and also goes to France with Huw, Barry, and Robbie to watch the 1998 World Cup. He also begins a relationship with Teresa di Marco, though it soon ends when Teresa's brother, Gianni, finds out about it. Gianni is aware of Lenny's womanising past, and refuses to allow Teresa to see Lenny.

After Huw leaves Walford in April 1999, Lenny remains behind working at the e20. When Steve Owen, his boss, is imprisoned for the murder of Saskia Duncan, Lenny earns the wrath of his friends for supporting Steve, instead of Matthew Rose, whom Steve has falsely named as the real murderer. Shortly after, Lenny is offered work in a West End club, so he decides to take the offer and leaves Walford in July 1999. 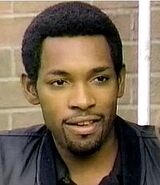 Lenny Wallace and Huw Edwards (25 December 1998 - Part 1)
Add a photo to this gallery
Retrieved from "https://eastenders.fandom.com/wiki/Lenny_Wallace?oldid=151719"
Community content is available under CC-BY-SA unless otherwise noted.