Laura is employed by local businessman Ian Beale as a nanny for his children, Peter, Lucy and Steven. She becomes attracted to Ian but her attempts to get closer to him are unnoticed. Laura is protective of Ian and eventually, Ian starts to see her as loyal and faithful but uses her for sex. Eventually, Laura demands more commitment but he refuses so Laura calls off their arrangement and kisses Garry Hobbs. Ian is furious when he finds out, leading to Laura's resignation, but before she leaves, Ian is declared bankrupt so Laura agrees to stay and help him look after the children, and they become a couple. Laura tries to raise money to buy the fish and chip shop so they can run it together, secretly borrowing money from his former wife, Mel Owen. Ian proposes marriage to Laura but her wealthy father opposes their relationship because of Ian's bankruptcy. They get married but Laura discovers that Ian knows about an inheritance she received and wonders if Ian only wants her money. Ian convinces her this is not true.

Laura is jealous when Ian goes into business with Mel. She catches them kissing and moves out, but Ian wins her round again. When Mel is arrested for money laundering and drug dealing, she signs her business over to Laura, worried about them being seized by the authorities but Laura refuses to give them back. Mel is arrested, and when released on bail, informs Ian of Laura's spiteful deed, and tells Laura that she was Ian's first choice. Laura delights in belittling Ian and decides she wants a baby. Ian refuses and Laura is heartbroken when she discovers Ian has been paying Janine Butcher to sleep with him. Janine goes to Laura's house because she feels guilty; they argue and Laura throws a pan of boiling milk at Janine, putting her in hospital and causing a feud between them. Laura reconciles with Ian on the promise that they will have a baby, but he has a secret vasectomy. Laura gets pregnant and, believing that he cannot be the father, Ian cons her into signing her share of the businesses over to him and throws her out. Laura tells Garry he is the father, following a drunken night together. Garry's wife Lynne Hobbs throws him out so they move into a bedsit together. Laura gives birth to Bobby Beale, but he needs a blood transfusion and Laura learns that Garry is not Bobby's father but, given Ian's lack of interest and wanting her son to have a father, Laura doesn't tell Garry. Phil Mitchell appoints Laura as the manager of the café that Ian used to own and she names it "Laura's", but Phil's sister Sam, sells the café to Ian and he sacks Laura.

Laura's feud with Janine continues after an argument outside the Queen Vic. Laura flies into a rage at Janine but is pushed over, feeling humiliated as she cries. Later, Janine stops Laura getting a job by badmouthing her and in response Laura ruins Janine's business venture, this leads to Janine confronting Laura in her home the argument escalates into a fight where Laura's swiftly overwhelmed and strangled by Janine before Janine leaves. An emotional Laura then decides to tell Ian he is Bobby's father but he shuns her. She writes him a letter but moments later, Ian visits her flat as he feels guilty. In her haste to answer the door, she runs down the stairs and trips on a toy, breaking her neck as she falls. She is found dead by Pat Evans. Janine is charged with murdering Laura but is cleared when Pat is eventually persuaded to give Janine an alibi. She also finds Laura's letter to Ian and blood tests confirm Ian is Bobby's father. He feels guilty for the way he treated Laura and takes custody of Bobby. 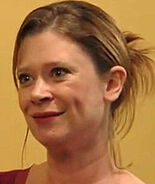 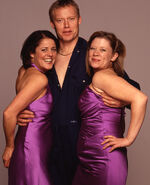 Laura with Garry and Lynne

Laura Beale - Name Card
Add a photo to this gallery
Retrieved from "https://eastenders.fandom.com/wiki/Laura_Beale?oldid=175617"
Community content is available under CC-BY-SA unless otherwise noted.