Cassie Carpenter
Kelvin Carpenter he made his first appearance 12 March 1985. He is portrayed by Paul J. Medford.

Kelvin was best friends with Ian Beale and they hung around a lot. In 1985 Sharon Watts and Michelle Fowler fought for his affections. He started up a knitting business with Ian which soon ended. Kelvin was joint vocalist with Sharon in a local band, The Banned, during the summer of 1986. Kelvin dates Carmel Roberts in 1987 but she is quite a bit older than him. In September 1987 Kelvin enrols at Norwich University in Norwich, Norfolk. His friends hold a party but Kelvin does not attend as he hates farewells. He sneaks away from Walford quietly, and rents his flat to Mags Czajkowski .

Kelvin has not returned to Walford since, but by 2010 he had moved back to London and Ian Beale found him on a social networking site where he said he had done well for himself and had his own flat in Shoreditch. However he admitted this was a lie after he and Ian did not meet up. Kelvin has not been in contact with Ian since. 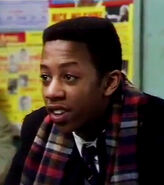 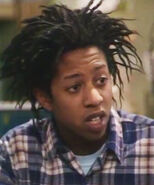 Retrieved from "https://eastenders.fandom.com/wiki/Kelvin_Carpenter?oldid=163623"
Community content is available under CC-BY-SA unless otherwise noted.