Kelly first appears on screen in December 2001. She is a young prostitute who is being pimped by the malicious Roxy Drake. She had been thrown out by her family when she was a young girl and Roxy had taken her in off the streets. Kelly felt that she owed her and she had soon been persuaded to act as an underage prostitute for Roxy's clientele. Zoe Slater, another runaway, has also been taken under Roxy's wing and she gives her a place to stay. Here, she meets and befriends Kelly, and on Roxy's instruction, Kelly sets about trying to convince Zoe to prostitute herself too. Zoe refuses to oblige, after which a furious Roxy starts demanding money from her in exchange for her hospitality. On Christmas Day that year, Kelly helps Zoe escape Roxy's evil clutches and Zoe returns to Albert Square, leaving Kelly to face up to a fuming Roxy.

Kelly is next seen in August 2002 when Zoe runs away from home for a second time, following her father's heart attack. She and Zoe decide to leave the United Kingdom and go to stay in Tenerife with one of Kelly's rich punters. In December that year, Zoe returns to Walford and brings Kelly back with her. She takes up lodging with the rest of the Slaters and is soon welcomed in as part of the family. Now that she has given up prostitution, Kelly has no money, so Zoe decides that she should become a partner in her clothing stall, and the two run it together in Bridge Street market.

On New Year's Eve, Kelly sets her sights on the inexperienced Spencer Moon and the two share a kiss. This leads Spencer to imagine that something more serious will happen between them, and he adorns Kelly with gifts and flowers in the hope that she will agree to date him. However, it is just a bit of fun for Kelly and she rebuffs all his further advances.

In order to buy into the stall, Kelly had stolen money from her ex-punter, Simon, and in January 2003 he shows up demanding that she pay him back. When she cannot repay him, he threatens her with the police, so Kelly cons Spencer into giving her money and also steals money from the stall to raise the funds. Zoe soon discovers that the money is missing, so Kelly blames Spencer and then flees. When the truth finally emerges, Zoe manages to talk Kelly out of leaving Walford and she quickly forgives her. Spencer decides to give up on Kelly after this, but on the night of his 18th birthday in April, Kelly decides to give him a night to remember by taking his virginity. Spencer is ecstatic, but his brother, Alfie, manages to upset things by offering Kelly money to take Spencer out for a second date. Kelly wrongly assumes that Alfie Moon ows about her past as a prostitute and furiously accuses Spencer of trying to buy her body, which puts a halt on their potential relationship.

Later in the year, Kelly and Zoe decide to move out of the Slaters' and share a flat on their own. At their flat warming party, Kelly gets friendly with new Walford arrival Ronny Ferreira. This upsets Zoe because unbeknownst to Kelly, she has a crush on him and she proceeds to get drunk in The Queen Victoria public house one night and begins bad-mouthing Kelly to her mother Kat, maliciously bringing up her past as a prostitute for all to hear. Ronny's best friend, Tariq Larousi, overhears their conversation and he forces Zoe to inform Ronny about Kelly's past. Ronny is disgusted, and cruelly dumps Kelly, which leaves her devastated. Kelly is furious when she discovers that it was Zoe who had told him, and accuses her of doing it to get her hands on Ronny. After much arguing, Zoe eventually promises not to make a play for Ronny, as their friendship is more important. However, with Ronny now showing a keen interest in Zoe, she finds it difficult to shun his attention. A few weeks later at Martin Fowler's birthday party, Kelly decides to make a move on Martin to make Ronny jealous. Ronny isn't interested and only has eyes for Zoe. Kelly ends the night in bed with Martin, feeling hurt and rejected. Despite her past promise, Zoe starts to date Ronny, which causes major rows between the girls.

Later in the year, Kelly witnessed Ronny kissing another woman, but Zoe refused to believe her best friend, accused her of being jealous and threw her out of their flat. That night, a hurt Kelly decided to forget her woes and went clubbing in Angie's Den, only to collapse later after taking some dodgy ecstasy (which was provided by Tariq). Kelly's brush with death made Zoe realise how much she valued their friendship and she immediately dumped Ronny. Kelly was forced to remain quiet about Tariq providing her the drug, after he threatened to tell everyone about her sordid past unless she kept her mouth shut.

On New Year's Eve 2003, Kelly and Zoe go to Scotland for an all-night rave along with the other youths in Walford. Whilst on the way to their destination, disaster strikes when the mini bus they are driving crashes in the middle of the Scottish moors, leaving them stranded and injured. Zoe is hurt the most, and whilst the others all go in search of help, Kelly stays by the wreck with her injured friend to care for her. The weather is bitterly cold and the two huddle together to keep warm. A concerned Kelly relays to Zoe how happy she is to have her as a friend and how meeting her has changed her life. As the night wears on, Zoe begins to lose consciousness, and Kelly becomes frantic, fearing that Zoe is dying. Kelly becomes tearful and overemotional, as does Zoe, and in the heat of the moment, they kiss. The following day the stranded teenagers are rescued, but Zoe is reluctant to discuss the kiss with Kelly. Zoe spends a few days in hospital and upon her release, she becomes distant from Kelly, refusing to spend any time alone with her. Eventually, Kelly manages to get Zoe to talk and they both decide they aren't lesbians and that the kiss only happened because they believed they were going to die. Soon after, Zoe moves out of their flat as she can no longer afford the rent. Gus Smith comes to live there in her place, but the girls remain close friends and working partners.

In May 2004, Vicki Fowler decides to play match-maker and attempts to set Kelly and Spencer up on several dates. Each attempt fails miserably so she decides to lock them both in the office at Angie's Den, taking both their phones so they have to spend the night in there together. They initially start to argue. Kelly tells Spencer she only had sex with him a year earlier out of pity and Spencer insults Kelly about her sordid past. However, as the night wears on, the two bigan talking, and when Vicki finally comes to let them out, she is overjoyed to find them kissing.

The couple remain happy for a while and it seems that Spencer and Kelly are smitten with each other. During the summer, Kelly, Spencer and Kareena Ferreira decide they want to become holiday reps in Ibiza. Kelly finds an article in a magazine promoting 'Red Hot Holiday' and the trio get ready for their interviews. Kelly and Kareena pass with flying colours, but Spencer doesn't so he is forced to stay behind while Kelly goes away. On the day of her departure, Kelly tells Spencer she loves him, which he reciprocates, and after a tearful farewell, Kelly promises she'll be back after the summer.

Spencer waits for Kelly to return, but by the end of the summer, Kareena returns and there is no sign of Kelly. Eventually, Kareena tells Spencer that she'd met another man and is not coming back. Kelly's last appearance is in June 2004. When Zoe leaves Walford in 2005, she goes to Spain to join Kelly. 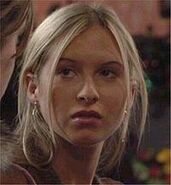 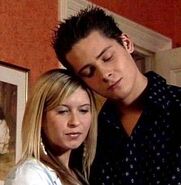 Kelly Taylor Promo
Add a photo to this gallery

Retrieved from "https://eastenders.fandom.com/wiki/Kelly_Taylor?oldid=208620"
Community content is available under CC-BY-SA unless otherwise noted.