Mechanic at The Arches

Belle Taylor
Mia Atkins
Keanu Taylor is the son of Karen Taylor, brother of Chantelle, Keegan, Bernadette, Chatham and Riley and father of Peggy and Albie.

Born on 23rd April 1999, Keanu has three brothers and two sisters. He comes from not a very wealthy family and he is very protective over his family. When Keanu was a baby, Karen dumped his father Shane, he then tried to kill Karen with a kitchen knife. Shane was arrested and pleaded guilty and went to prison for 12 years. After Shane was released,  he committed another crime and was sent back to prison.

His family is used to the electricity cutting off, bailiffs coming and taking their electronics, loan sharks demanding money. As Keanu is the man of the house, he has to stay strong for his family, this includes paying for the electrics and helping his family whilst they’re in drama.

Karen, Keanu and Bernadette move into Albert Square, upsetting the residents with their rowdy behaviour. Keanu shows support towards Bernadette when Karen tells him that she is pregnant. Karen pressures Keanu into talking to Bernadette about the father of her baby. Karen overhears Bernadette talking to Keanu, who Karen thinks may be the baby's father. Karen confronts Keanu, asking if he is the father, and Keanu is hurt that Karen thinks that, but admits the father is in Bernadette's year. When Keanu sees fliers for Arthur Fowler's memorial bench, he tells Bernadette that they need to return the bench without being caught. A social worker who visits Bernadette realises that the Taylors stole the bench and later, PC Jaz Jones visits the family to arrest Karen, but Keanu stops him. Keanu is given a warning for the bench theft and upset that he will not be taken on full-time after the mechanic firm he completed his apprenticeship at. Keanu asks around for work and apologises to Arthur's children, Michelle and Martin Fowler, for the bench theft. Keanu is told by Ben Mitchell he is not looking for staff when he asks. Keanu tells his family he is determined to get a job and not resort to benefits.

Linda Carter, the landlady of The Queen Victoria, advertises for bar staff and Keanu hands in his CV to her and her husband, Mick Carter. Linda offers Keanu a trial shift, but is upset when he is sent home by The Vic's business consultant, Fi Browning. Keanu is taken on by an employment agency, but considers applying for benefits when the bailiffs try to visit their home. When Ted Murray and his wife, Joyce, find that they have been burgled, Ted blames the Taylors and the police question them. Keanu insists to Ted and Joyce that they played no part in the break-in and Joyce is grateful when Keanu offers to board up their window. Keanu manages to convince Bernadette to go to teenage parenting classes and decides to go with her. Following a gas explosion, Bernadette suffers a miscarriage, devastating the family. Struggling to gain employment, Keanu goes for a job as a nude life model for an art class, but he is shocked when his neighbour Ingrid Solberg attends the class, and she is shocked to find he is a model. Keanu considers joining an escort agency and is tempted by the money he could earn. Keanu receives a booking and asks Kathy Beale for advice on women. Keanu goes on a date with a client, Julie, and she invites Keanu to her room. Keanu finds Julie crying and they both admit it is their first time being and using an escort and Julie opens up about her ex-husband to Keanu.

Keanu catches the attention of Aidan Maguire with his physical strength and Keanu is recruited into helping with a robbery with Phil Mitchell, Mick and Vincent Hubbard. Bernadette, who gets a job at The Albert glass collecting overhears, but agrees to keep quiet. Prior to the job, Keanu threatens to quit when he thinks he is only getting paid £1,000, but Aidan insists he will get more. The heist goes ahead but Mick is shot. The money then goes missing and Aidan instructs everyone involved to remain away for two weeks in case the police ask questions and when they meet, everyone wonders who has taken the money. Keanu is asked by Aidan to get rid of a box that contain teeth belonging to Luke Browning, but they end up with Phil Mitchell. Phil employs Keanu as a mechanic and on his first day, he is reunited with Mitch Baker, the father of his half-siblings, Chantelle and Keegan Baker. Keanu undertakes work on Mitch's van and warns him to keep away from his family, lying that they do not live on Albert Square. Mitch later returns and he shouts for Karen and Keegan at the flat, but Keanu punches him. When Karen brings Mitch home, Keegan, Keanu and Bernadette do not want Mitch's presence, but Karen later sneaks him into the flat. Keanu is disgusted with Karen for letting Mitch stay the night and Mitch brings up Keanu's father. Karen attempts to reluctantly talk to Keanu about his father, but she fails and talks to Mitch about her being stabbed by Keanu's father.

1. Dennis Rickman Jr (February 2020) (instigated): Phil pushes Keanu and falls onto the wheel which causes the boat to crashed and Dennis drowned. (Manslaughter) 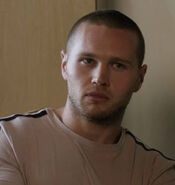 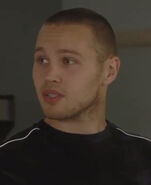 Add a photo to this gallery
Retrieved from "https://eastenders.fandom.com/wiki/Keanu_Taylor?oldid=221026"
Community content is available under CC-BY-SA unless otherwise noted.