Kathy Beale
Marie Evans
Kathy's is the local café on Bridge Street , currently owned by Ian Beale. The café has had various different owners in the past, however, the current owner, Ian, is the longest serving owner. In Walford there is another café on Victoria Road. Kathy's Café has a Food Hygiene Rating of 5.

The café in Bridge Street, Walford was originally named 'Al's Café' and was leased and ran by Ali and Sue Osman who are the first known owners of the premises. In June 1986, Ali and his brother, Mehmet, started a taxi firm called 'OzCabs' and operated the business from a corner table in the café.

In 1988, Mehmet and Ali ran up huge gambling debts to Joanne Francis, manageress of Strokes Wine Bar, and who is also a member of the criminal underworld known as The Firm. Desperate for money the two turn to their café employee, Ian Beale, for a loan. He agrees, but charges his employers 10 percent interest and later, when they cannot meet the repayments, he demands a stake in the café. The brothers refuse, but the debt eventually leads to Ali losing the café to Ian the following year.

Ian changed the name to 'Bridge Street Café' and managed it with his wife, Cindy Beale, until he sells the business in 1991 to his mother, Kathy, Aunt Pauline and local businessman Frank Butcher. Being the major shareholder, Frank took a hands off approach to running the café and left most of the day-to-day work in the hands of Kathy and Pauline.

In June 1992, Pauline travels to New Zealand to tend to her brother, Kenny, who was involved in a car accident. Upon her return in late September, her and Kathy have a falling out over the running of the café. On 3 November, Kathy offers Pauline £6,000 for her share, however she declines and this results in a huge row between the two. Realising her heart's no longer in it, Pauline agrees to sell her 30% share to Kathy on Bonfire Night. At the time of the sale, it's revealed by Kathy that the business is worth around £20,000, although this was before it was valued by a surveyor.

In early 1993, the café underwent a face-lift with changes being made to the interior and exterior of the building. Kathy's boyfriend at the time, Richard Cole, helped her with the refurbishments and on 12 January, he gifted her the iconic 'Kathy's' neon sign which he brought for £40.00. Following the makeover, Kathy made the decision to open the café in the evenings as a bistro with Christine Hewitt being employed as the cook. Her business venture had a bad start when Mandy Salter failed to hand out the promotional flyers for the opening night. On 16 September, Kathy sacks Christine following pressure from Pauline over her affair withArthur Fowler. Struggling to manage on her own, Kathy makes the decision on 2 November to close the bistro, but continues to run the café during the day.

In February 1994, Frank is deep in debt and offers to sell Kathy his share of the café to her for £9,000. She considers it, but later informs him that she cannot afford it. Phil Mitchell visits Frank and offers him £4,500. Frank declines and later tells him that he will lower his offer to £7,000, but Phil tells him that his asking price is still too high. They eventually compromise on £5,000.

The following year, Steve Elliot puts the idea of an all-night café to Kathy, as it's currently only open 12 hours - 6:30am to 6:30pm. She reminds him that the bistro didn't do well, but he says that was for different clientele. He thinks that leaving café open as it is will do well with cabbies, lorry drivers and late homecomers. She agrees to rent the café out to him at night and gives him a one month trial. Steve acquires a late night licence and opens the all-night café on 6 February. After the first month proves a success, Phil speaks to Steve about sharing a percentage of the profit with Kathy. Steve offers Kathy whatever percentage she thinks is fair - she says 30%.

Ian eventually bought back his shares of the café following the birth of Kathy's second son, Ben Mitchell. Ian stayed in control of the café for the following five years and employed his latest fiancée, Melanie Healy as a waitress. Mel didn't love Ian and left him heartbroken on the night of their wedding. When Ian grassed up rival Phil Mitchell and his girlfriend to the market inspector, Phil took revenge by informing the tax officers about Ian's tax avoidance. Ian was left in a huge amount of debt and desperately tried to save the café and his other businesses from bankruptcy. His attempts were dashed and he lost the café .

Following the downfall of the Beale empire, the café was closed down for a couple of months and then reopened by the Mitchell family. Having a strong hatred for Ian and the Beale family, Phil Mitchell took great pleasure of giving the café a full makeover erasing any memory of his rival Ian Beale from the place.

Ian tried to rebuild his business empire and desperately wanted to gain back control of the café. Phil, realising how much the café means to Ian enjoyed watching Ian suffer. In order to infuriate Ian further, Phil hired Ian's ex-wife Laura Beale as manager.

In 2003, when Phil was framed for armed robbery by Den Watts, Phil signed the café over to his younger and naive sister Sam. Having built a new empire for himself, Ian took advantage of Sam's vulnerability and persuaded her to sell him the café. She accepted his offer, and he once again took back control over the café. Ian employed his new love interest, Jane Collins as manager. Over the next five years. Jane and Ian's two eldest children, Peter and Lucy, would do most of the work around the café whilst Ian was elsewhere making business deals.

In 2009, Nick Cotton took Heather Trott, Lucy Beale, Lauren, Abi and Bradley Branning hostage because he had failed in his attempt to poison his mother Dot. Nick failed to notice that the gas cooker was on fire. Everyone managed to escape but Bradley went back into the burning café to save Nick. Nick escaped and Bradley was left trapped inside as the café exploded. Bradley also survived. Later that year, the café was reopened with a new makeover designed by Ian's brother-in-law Christian.

In 2011, Ian and Jane's marriage fell apart and they went into battle for the Beale empire. Ian was desperate to protect his businesses, especially the café as it was part of his history. Phil Mitchell joined forces with Jane in order to ruin him just like he did before. Phil managed to outsmart Ian, and Jane won the café in the divorce battle, leaving Ian devastated. However, Jane left Walford soon after gaining ownership of the café. Jane sold the café to Phil, who gave it to Shirley as a present. They changed the name to 'Shirley's Café'.

Ian Beale brought the café back off Phil in April 2012, naming it 'Mandy's' after his fiancée at the time, Mandy Salter. After Mandy broke up with him, Ian had a nervous breakdown and left Walford. During this time, Lucy was left to look after all the businesses herself. Lucy renamed the café Cindy's, after her mother. After Ian was found and returned to the square, Lucy would only allow him to return to the house if he signed over all his businesses to her. Later, the café returned to Ian's ownership. In November 2016, Kathy starts working at the café again and in December 2016 Ian renamed the café back to 'Kathy's'. In 2017, Ian sold the café to property development company Weyland & Co as he wanted to focus on the expansion of his restaurant Beale's. Unbeknownst to Ian, Weyland & Co was owned by James Willmott-Brown, who raped Kathy over 20 years ago. After James's death, his daughter Fi signs the café over to Kathy to apologise for believing her father's obvious lies. 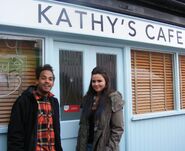 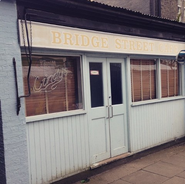 Cafe Interior in the 80's

Laura, Pat and Kathy in Cafe

Gareth Malone and Nitin Ganatra in the cafe.

Gareth Malone and Nitin Ganatra in the cafe. 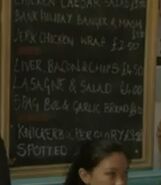 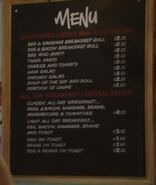 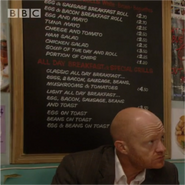