PC Kate Mitchell (née Morton) made her first appearance 24 December 2002. She is portrayed by Jill Halfpenny.

Kate met Phil Mitchell when he was in hospital visiting his godson Jamie after being hit by a car. When Jamie dies Kate gives Phil a shoulder to cry on and they quickly begin a relationship. She tells him that she is a nail technician and that her name is Tyler, and one time when she confronts him about rumours that he killed his ex-lover Lisa Fowler her notices a small microphone under her jumper. She reveals to him that she is an undercover police officer who is trying to get him done for Lisa's murder. Phil goes into a rage but she tells him that she's fallen in love with him and she will quit the police so that she can be with him. Although he's angry at first he forgives her and she opens up a nail salon and her proposes to her.

On their wedding day, her alcoholic father, Geoff, makes an unwelcome return and refuses to hide his hatred for Phil, although they make up for Kate's sake. At their reception in The Queen Vic, Kate throws her bouquet of flowers, only for them to be caught by Lisa, who demands to see her daughter louise, who Phil has custody of after travelling to Portugal to get her from Lisa. After Phil is framed by Den Watts and arrested for attempted robbery and assault, Kate is disgusted and ends their brief marriage. She gives Louise to Lisa, who leaves Walford again with her daughter.

Kate gains a new work partner, Den's wife Chrissie Watts, a hairdresser. Kate and Den begin an affair, and when Chrissie finds out, she hacks off Kate's hair before confronting her. However, they later become friends again and continue to work together. After her father's suicide, Kate is offered the opportunity to rejoin the police force in Brighton. She takes the offer, closes the salon, and leaves Walford. 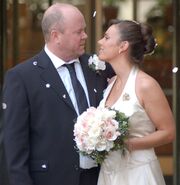 Phil Mitchell and Kate Mitchell Wedding
Add a photo to this gallery
Retrieved from "https://eastenders.fandom.com/wiki/Kate_Mitchell?oldid=166511"
Community content is available under CC-BY-SA unless otherwise noted.