BBC One
BBC One HD

EastEnders
EastEnders: Back to Ours

Kat and Alfie: Redwater is Kathleen and Alfie Moon's spin-off show, which aired on 18 May 2017, focusing on their search for Kat's son in the fictional town Redwater in Ireland.

The spin off show was announced on April the 4th 2015 and is to be set in Ireland.

Speaking about the new drama, Dominic said “In the next few weeks on EastEnders, viewers will witness several huge twists for Kat and Alfie Moon that will change their lives forever. Now is the perfect time to take two of EastEnders’ most beloved and enduring characters out of their comfort zone as they head to Ireland to search for answers to some very big questions… My team here are very excited about creating a whole new drama that stands apart from EastEnders while taking our style of storytelling to a place of stories, myth, secrets and immeasurable beauty.”

Charlotte Moore, Controller BBC One added “Life is anything but dull for favourite EastEnders couple Kat and Alfie as they embark on a new life in Ireland in this exciting drama series. Rest assured, their rollercoaster isn’t set to end any time soon.”

Speaking of their new drama Shane said “Both Jessie and I are absolutely thrilled to be given this amazing opportunity. To have a whole drama focussed around Kat and Alfie is a huge honour for us both and we just can’t wait to start filming.”

Jessie Wallace added “I have always loved working on EastEnders so when I heard of this new drama to take Kat and Alfie outside of Walford, I couldn’t believe our luck. To be exploring the next chapter for Kat as well as working alongside my best mate, Shane, is a dream come true and a huge compliment.”

The show, which is currently untitled, will consist of six hour long episodes which will air on BBC One. Filming commences in April 2016 and the show will transmit in 2017.

Mo tells Kat that Harry left her some money in his will. Alfie finds out, and tries to convince her to use the money to make a fresh start after the divorce. She takes the cheque from Mo and later rips it up in front of Alfie, insisting it doesn't change the past. Stacey reveals to Alfie that their rent is increasing and Kat is struggling with money. Kat is devastated and she writes a letter to the solicitors about receiving all the remaining money from Harry's will, and intends to post it the next morning. The next day, Kat changes her mind and throws the letter away but Mo retrieves it and posts it on her behalf. Mo then transfers the money into her own account. Kat later finds out about this, and then, after burning the money, falls into a depression and tries to kill herself. This causes Kat to reevaluate her life, so she visits the nunnery where she gave birth to Zoe to seek some answers. A nun, Sister Ruth, remembers her going into labour and they talk about the past and the future. Unknown to Kat, the nun checks their records and reveals that Kat also gave birth to a son. Later, a content Kat returns to Walford and tells Stacey and Alfie that she has finally made her peace with the past and is no longer willing to let Harry control her. After a night together in central London, Kat and Alfie decide to buy a scratch card. They win a million pounds and being to make plans to move to Spain so Kat can be closer to Zoe. But, Alfie discovers he has a brain tumor and worries about going. He then ask Sonia if it is safe to fly and she advises against it, so he decides not to tell Kat. Kat and Alfie then leave by car with Tommy, Bert and Ernie to live in Spain. They return eight months later as Kat isn't enjoying Spain - Zoe has told her yet again she wants nothing to do with her. She is surprised when Sister Ruth visits her, and reveals the truth about her secret son, Luke to her. After Kat argues with Mo and Charlie about the secret son after discovering that Mo knew, Charlie has a heart attack and dies, leaving Kat devastated. Belinda later returns and blames Kat for Charlie's death. Alfie later tells her that he has a brain tumour, but assures her it is benign. Kat, after learning that her sisters do not want her at Charlie's funeral, visits Charlie's body to say her goodbyes, and vows to be at the funeral to make him proud. However, on the day of the funeral, Kat notices that Stacey is ill so stays with her at the Vic to say her goodbyes to Charlie. At the wake, she makes up with Belinda. She confesses to Belinda about Luke, and Belinda says she remembers Viv taking her on a trip to Redwater, Ireland, and noticing a couple staring at them with a newborn son, and she thinks it might be where Luke is. Kat tells Alfie, who wants to start planning a way to find him.

Redwater Plaque (Episode 1)
Add a photo to this gallery 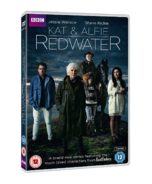 Redwater DVD Cover (2017)
Add a photo to this gallery

Retrieved from "https://eastenders.fandom.com/wiki/Kat_and_Alfie:_Redwater?oldid=85137"
Community content is available under CC-BY-SA unless otherwise noted.