19 June 1997
Julia Smith (born 26th May 1927 in London. died 19th June 1997 in Kensington) was the first Executive Producer of EastEnders and also the creator alongside Tony Holland.

Julia was born and educated in London. After leaving the Royal Academy of Dramatic Art she joined the BBC as an ASM and became a production assistant. She then worked at the Stratford Memorial Theatre for 2 years and returned to BBC television in 1963 to direct her first play. The BBC productions she directed in the 1960s and 1970s included 17 episodes of Doctor Finlay's Casebook, Doctor Who, The Newcomers, The Railway Children, Z Cars, and Spy Trap.

From 1973 to 1982 she was the producer of BBC 1's successful nursing series Angels and she then devised (with Tony Holland) and produced three series of The District Nurse. In February 1985 came EastEnders, which Julia also devised with Tony Holland, and which almost immediately went to the top of the ratings as the BBC's most popular programme ever, where it has remained ever since. Her final contribution to EastEnders, along with fellow creator Tony Holland, came in early 1989.

In the 1990s, Tony and Julia created a new soap opera for the BBC which would follow the lives of ex-pats in Spain. They wanted to name the new soap Little England but the BBC preferred Eldorado. The new soap was a co-production between the BBC and Cinema Verity, an independent company founded by Verity Lambert who had produced Doctor Who and The Newcomers amongst many other programmes.

The production of Eldorado was troubled from the start with the building of the sets being delayed and then the BBC decided to bring forward the air-date of the soap. This meant filming on the soap had to start even though construction of the sets was not completed with actors having to film in half-completed sets without soundproofing – meaning the sound quality was often poor. There were many other problems associated with air-date being brought forward.

All these problems resulted in Eldorado, hailed as an expensive new soap, reflecting the somewhat mythical problem values on defunct soap Crossroads; sets that shook, actors that fluffed their lines and poor storylines. The critics were savage with Eldorado blasting it for being an expensive flop for the corporation; lampooning the use of amateur actors and bad stories. Although Eldorado launched well with 8 million viewers very soon the ratings were tumbling down as the soaps problems became very apparent on-screen. When the ratings dropped below three million the press called for it to be axed and many attacked the BBC and the license fee. It was a huge disaster for the BBC and it’s not surprising that under the mounting pressure Julia Smith had a breakdown.

The experience of working on Eldorado and the stress which Smith was placed under forced her to retire from television altogether. The production flaws on Eldorado were not of Smith or Verity Lambert ’s making (Lambert had also come under considerable fire for her involvement with the soap) but were instead mainly due to outside influences. The press, however, decided it was Julia Smith who was to blame. In 1997 she died from cancer and her funeral was attended by many EastEnders cast members including June Brown and Wendy Richard. 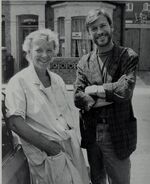